The CZ 805 BREN is a Czech assault rifle with a modular, multi-caliber design, with an aluminum alloy upper receiver and polymer lower receiver / fire control unit. The magazine housing is a separate detachable unit, which can be replaced in the field as part of a caliber change. The weapon is gas-operated and features a rotating bolt and a manual gas regulator.

The weapon features quick-change barrels, allowing users to change calibers and barrel lengths according to the mission profile.

The CZ-805 is an unlockable assault rifle in Battlefield 4.

The CZ-805 is the first unlockable weapon by gathering 1500 points in Baku. The Kobra, Magnifier, and Vertical Grip are its attachments. It sports a Worm Autumn finish.

The CZ-805 is the last assault rifle to be unlocked through score at 71,000 score, and performs similarly to the AUG A3, except the CZ-805 has slightly more horizontal recoil and lacks the bullpup advantages with tighter hipfire and faster movement speed while aiming down the sights. The weapon's recoil itself is relatively unbalanced as the weapon shifts noticeably to the right while firing. Despite this, the recoil can be made more manageable through the use of an Angled Grip, making the weapon more ideal for mid-ranged combat.

The weapon features a burst fire function which allows it to obtain longer distances at ease though this has no effect on the rate of fire. While the weapon can fire quickly, its recoil combined with its unbalanced statistics make striking enemies relatively difficult. 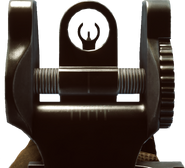