Camouflage is a Codex Entry featured in Battlefield 1. It is unlocked upon killing an enemy Scout with a rifle in the Scout kit. 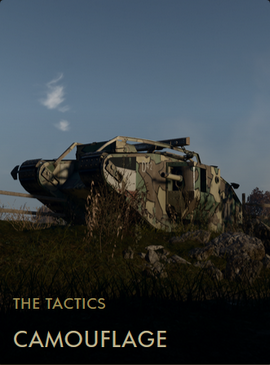 Remember that the French went into this war in bright red pants. That turned out to be less than optimal. What made the modern weaponry of World War 1 so different from earlier wars was its ability to reach greater distances. Rifles could now aim deadly fire at targets a mile away, and the range of artillery was greater than ever before. Optics also came into play. Camouflage was needed to defeat these newer kinds of weapons. It was also needed to create concealed positions to shoot from.

The development of camouflage was ever-changing, ranging from psychedelic "dazzle camo" on naval ships and vessels to fake trees and fake dead cows providing excellent sniper positions. Concealment in every shape and form could provide the difference between life and death. Cannons, ambulances, planes, helmets, tanks and cars were painted and artistic movements such as impressionism and cubism influenced the development of camouflage.

Retrieved from "https://battlefield.fandom.com/wiki/Camouflage_(Codex_Entry)?oldid=343345"
Community content is available under CC-BY-SA unless otherwise noted.