Caporetto is a Codex Entry featured in Battlefield 1, introduced in the Apocalypse expansion. It is unlocked upon winning a round on Caporetto. 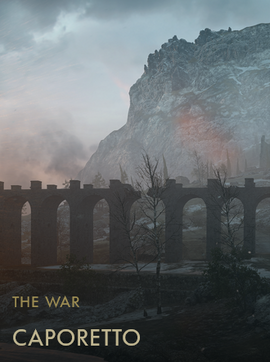 The 11th Battle of the Isonzo River in the summer of 1917 had left the Austro-Hungarian frontlines dangerously weak, to the point where they might not withstand another Italian offensive. So with an initial plan to merely stabilize the front and allow thier allies the time to reorganize, German High Command assigned seven divisions with elite shock and Alpine troop detachments to General Otto von Below for an offensive on a 25 km long salient at Tolmino, close to the village of Caporetto in the Isonzo River Valley. On the misty morning of October 24th, a short but violent barrage of high explosive and chlorine and phosgene gas shells exploded on the Italian positions in the valley. The outdated gasmasks of the Italian soldiers were of little use against the attack, and the sudden bombardment caused panic and confusion. That panic opened up gaps for the elite German units, who began slipping through and behind the Italian lines. Small groups, armed to the teeth with hand grenades, flamethrowers, and light machine-guns outflanked the Italian strong points on the steep hills, suddenly emerging from behind. With the Italian center breaking, the Austro-Hungarian 5th army under General Borojevic von Bojna was able to advance in a pincer movement from the south, turning the attack into a rout. Over 300,000 prisoners were taken within a few days as the Austro-German forces advanced dozens of kilometers. The remnants of the Italian army finally established new defensive postitions at the Piave River.

Retrieved from "https://battlefield.fandom.com/wiki/Caporetto_(Codex_Entry)?oldid=343382"
Community content is available under CC-BY-SA unless otherwise noted.