Caproni CA.5 is a Codex Entry featured in Battlefield 1. Detailing information about the Caproni Ca.5, it is unlocked by obtaining ten kills with the Bomber Planes. 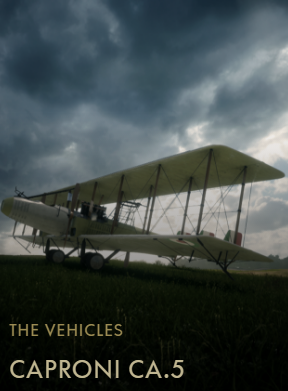 The Caproni saw action in the battle of Vittorio Veneto, the last Italian offensive. Some of the crews were mixed Italians and Americans in the same plane. Imagine the conversations as they were engaged by Austro-Hungarian aircraft.

The design was based upon the Caproni Ca.3 with a significant power upgrade and many other modifications, allowing this heavy bomber to strike fear into the hearts of the enemy. It first flew in 1917 and was retired in 1921. It was armed with several machine gun positions and could carry 533 kg (1,170 lbs) of bombs.

Retrieved from "https://battlefield.fandom.com/wiki/Caproni_CA.5_(Codex_Entry)?oldid=343270"
Community content is available under CC-BY-SA unless otherwise noted.