Capture the Flag a gamemode featured in the Battlefield series. Both teams must try and take each other's flag from their respective bases while protecting their own.

The objective of the game is to capture the opposing team's flag while defending one's own. This can be done by getting in to where the flag is located in the enemy base, taking it, and returning it to the player's base alive. This task is usually much easier said than done, as the opposing team's base is usually heavily defended and players are alerted once a flag is taken from its base, causing the team whose flag was stolen to frantically try to get it back at any cost.

Unlike Conquest, Capture the Flag has infinite tickets for each team, but it has a time limit of 15 minutes (or more depending on the server settings), allowing players to score points by capturing flags within that time period.

Flags can be held while on any vehicle as well, regardless if it is piloted on land, sea or air. It also does not matter whether the flag-carrier is on the driver or passenger seat of the vehicle as well. This allows for much faster delivering of flags to other bases due to the large nature of the maps playable in the game mode.

In Battlefield 1942, Capture the Flag is a custom gamemode based on the standard Conquest gamemode, and thus has some differences to traditional appearances.

Both teams start off with two bases that they can spawn in, while there are two more bases that start off neutral and can be captured by both players just like in Conquest.

The main objective for both teams is to capture the other team's flag at their furthermost base.

To capture a flag, a player only has to stand near it for a couple of seconds. Only the player who reaches the area near the flag first can have the flag. Although players can carry the flag in vehicles, they must be on foot if they want to capture the flag in the first place.

If an enemy has captured the flag, all players need to do is to kill the enemy flag-carrier, stand near the flag for a while, and the flag returns to the base.

The team with the most flags captured before the time limit expires is the winner of the match.

One difference from Battlefield 1942 is that players can still capture flags while inside a vehicle instead of having to exit it and enter in it again.

Players must also retrieve dropped flags by themselves if they want them returned to their bases after they've killed the enemy flag-carrier. This also gives the flag-carrier's teammates a chance to continue carrying the flag to their base in order to capture it.

Just like in Battlefield 1942, the team with the most captured flags by the end of the time limit will win the match.

Capture the Flag is a gamemode featured in Battlefield Heroes.

Each team has one flag placed on the map, which a player of the opposing team can pick up by touching it. By taking the enemy flag to his own team's base and placing it at his own teams flag, the team scores a capture point. With three captures a team wins.

The enemy flag can not be placed at the player's own base, if they carry their teams flag. If the flag-carrier is killed, a flag timer will start. Once it reaches 0, the flag will return to its base. If the flag is picked up before the timer runs out, the flag timer is reset. The speed by which the flag timer decreases can be influenced by the team owning the flag. The more player standing near the flag, the faster the timer will reach 0. However a maximum of 4 player can influence the timer at a time.

Additionally, a 10 minute timer is in place. Once it expires, the team with the most flag captures wins, or in the case that both teams had an equal number of captures, the team that first saved a flag wins. 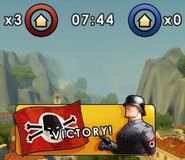 Capture the Flag is an official gametype featured in the Battlefield 3: End Game expansion.

Recovering the team's flag if dropped is accomplished similar to Conquest, by standing in the flag's (re)capture zone. The capture rate is increased when more allies are present. The flag will automatically return to the respective team's base after a set period of time, although this is far longer than waiting to return the flag by standing in its (re)capture area. Dropped flags can be immediately picked up by an enemy, resetting the recapture timer if dropped yet again.

Both teams must capture three flags (by default) if they want to win before the time limit expires. Otherwise, the team with the most flags at the end of the match wins. In the event that both teams have captured an equal number of flags when the timer runs out, the highest cumulative score of each team will be compared, and the highest scoring team is the victor. In the rare occasion that both teams’ score is equal when the timer runs out, the victory will be given to the US team by default.[1]

Capture the Flag is a gametype featured in the Battlefield 4: Second Assault, Dragon's Teeth, and Final Stand expansions.

A quad bike transporting a flag in CTF.

Battlefield Hardline features the Capture the Bag variant of the CTF gamemode, set to be added in the Battlefield Hardline: Getaway expansion. As the gamemode's name suggests, players must capture a Money Bag instead of a flag and attempt to bring it back to their deployment.