The Carl-Gustaf is a Swedish made, multi-role, recoilless, 84mm, anti-tank rifle. It was designed in 1964 by Hugo Abramson to fill the role of a squad anti-tank weapon.

High
The Carl Gustav M2 is the standard anti-vehicle weapon issued to the EU Engineer kit. It is statistically identical to the PLA's PF-98, the USMC's SMAW, and the MEC's RPG-7V. The Gustav is highly effective at taking out vehicles, being capable of taking out a tank with about three missiles, and can destroy light transports and helicopters with one. Though ground and naval vehicles pose little problem to the Gustav, helicopters are more difficult to deal with due to the rounds being unguided, forcing the Engineer to guess the helicopter's flight path to take it down with a Gustav.

The M2CG can only be found in the mission Ghost Town, replacing the statistically-identical RPG-7 and M136 AT4 from the previous missions as an anti-vehicle weapon, being used by the MEC to take out any vehicle the player uses. The player can also pick up the weapon and use it against them and their vehicles. It is first available right from the beginning of the mission, located in a corrugated metal shed with 2 big fuel tanks on the side at the edge of the village housing the first objective - the crate is the first crate available to the player in the mission, and it is a very useful weapon to deal with the arriving Cobra 4WD and 2T Stalker. After that, it is generally available in almost every other settlements/outposts that the player progresses through later in the mission. It can also be picked up at the helipad when the player battles against the Legionnaire's Ka-52, and it is actually one of the only 2 effective methods of taking out the helicopter, the other being the LZ-537.

The M2CG is used by the MEC Demolition kit; its statistics are identical to those of its RU and US counterparts. However, the M2CG has a different reload animation compared to the RPG-7 and M136. This can give players an advantage when using it as the lack of awkwardness can help with making the next shot more accurate.

The M2CG in Battlefield: Bad Company on the multiplayer map Oasis

The M2 Carl Gustav AT is a shoulder-fired missile featured in Battlefield: Bad Company 2.

The M2 Carl Gustav AT is the only shoulder-fired missile that can be used by the player in the campaign. The Carl Gustav is always placed at a convenient spot whenever there is an enemy vehicle nearby. Unlike the first Bad Company, the Carl Gustav takes up one of the player's weapon slots instead of the gadget slots. It is considered a Collectible in the campaign and can be selected from various supply drops in the levels.

It is also used by both Latin American Militia and Russian Ground Forces units against the player in almost all of the levels in the singleplayer.

The M2 Carl Gustav AT is the second anti-vehicle weapon unlocked by the Engineer kit, requiring 8,700 Engineer points. It does less damage to vehicles than the other launchers, with 280 base damage, as opposed to the M136 AT4's 380 and the RPG-7's 360. However, the rockets fly significantly faster than those of the RPG-7 while still being capable of locking on to vehicles tagged with a tracer dart. It also has significantly faster reload than the RPG-7, and slightly faster than the M136 AT4, with the M136 AT4 also including the time to control the warhead.

The Gustav is well-suited for bunker-busting, anti-infantry, and anti-helicopter roles because of its accuracy, speed, and (in the case of anti-infantry) large splash radius. The M2 Carl Gustav is often more efficient than even the AT4 at destroying helicopters because the projectile fires at full speed immediately, unlike the AT4 which takes some time to accelerate to full speed after being fired.

The Carl Gustav is extremely effective when used by UH-60 Black Hawk passengers due to its high damage and quick projectile speed.

Against main battle tanks and infantry fighting vehicles, players should aim for the sides or rear, as the damages will multiply gradually from 1.16x damage up to 2x damage if it hits at a 90 degree angle. An M2CG coupled with Improved Demolitions can destroy a tank in 2 hits to the sides or rear.

The M2 Carl Gustav AT at Cold War in Rush.

The view through the M2 Carl Gustav AT's scope. 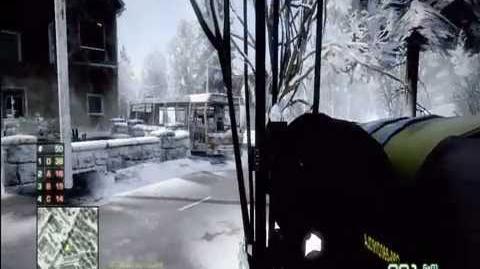 M2 CARL GUSTAV AT
Gameplay of the M2 Carl Gustav in multiplayer.

3–4 rockets
The Recoilless M5 appears in Battlefield 2042, serving as the default assault gadget.

The future weapon features a vacuum-fluorescent display with rangefinder and time-of-flight calculator. Upon firing the weapon, the display reminds the user to reload.

With assistance from a friendly SOFLAM, the M5 can lock onto laser-designated targets. The M5 also generates backblast that can wound enemies caught behind the player.