"A Homage to a Classic Game Mode, Battlefield 2142 and Titan mode veterans will feel right at home with Carrier Assault."

Carrier Assault is a gamemode featured in the Battlefield 4: Naval Strike expansion. It is a re-imagined variant of the Titan game mode from Battlefield 2142.

Players start out at their respective carriers where they must then capture missile launchers scattered throughout a map. There are a total of three flags in the small variant and five flags in the large variant, similar to Conquest small and Conquest large. Once captured, the launchers will periodically damage the opposing team's carrier. The missiles hitting the enemy carrier deal 1 percent (1 hit point) of the starting health and the launchers shoot in intervals of 15 seconds.

Once a carrier has sustained 50% damage, a message "PREPARE FOR BOARDING" will appear. In around half a minute, its hull will be blown open allowing for the opportunity to board it and destroy it. This will also reset its health bar to the second phase and highlight M-COM A.

Alternatively, players may choose not to board the opposing carrier as the missile launchers will still periodically damage it until it is destroyed.

After the hull of a carrier has been blown open, players may board either by driving a boat or flying a helicopter to the carrier and climbing aboard, or by paradropping onto it from spawn points above.

Once the first M-COM is destroyed, the doors to the engine room of the carrier where the second M-COM is found will open up soon after. After both M-COMs have been destroyed, the round will end with the losing team's carrier exploding in the background. 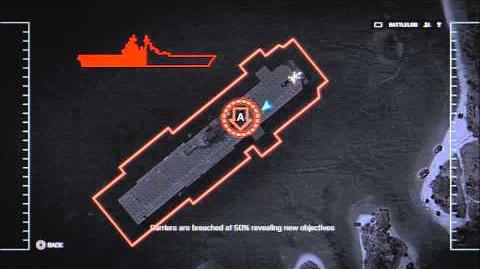 Marines preparing to assault the carrier.