Celebrities is a Codex Entry featured in Battlefield 1. It is unlocked by collecting all Field Manuals in the chapter Hidden in Plain Sight in the singleplayer mission Nothing Is Written. 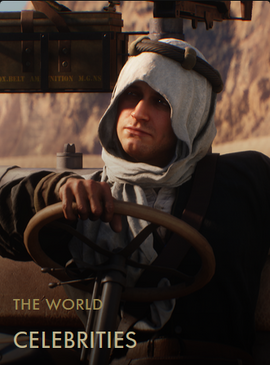 Many celebrated names of the 20th Century served in the Great War in their youth: authors such as J.R.R Tolkien and Earnest Hemmingway, and the philosopher Ludwig Wittgenstein, to name but a few. For many others, it was the war that made them famous: Mata Hari, the Red Baron, Edith Cavell, Lawrence of Arabia. And infamous: Adolf Hitler, Benito Mussolini, George Patton.

There were also those who opposed the war, whose influence on our world would be enormous: Albert Einstein and Vladimir Lenin. It was, to put it simply, an age of heroes and legends in the face of an apocalypse.

Retrieved from "https://battlefield.fandom.com/wiki/Celebrities_(Codex_Entry)?oldid=343251"
Community content is available under CC-BY-SA unless otherwise noted.