PC
"By 2142, Cerbere Landing was the last EU stronghold on the European continent. The port served as the chief defensive hub for the EUs Northern Mediterranean operations. Tasked with seizing the harbor, PAC General Yuri Vladomirovic used commando units equipped with the new IT-33 Optical Camouflage to infiltrate the city. Once inside they sabotaged the defenses, allowing the General to land his forces in the main harbor. There they faced the Hell Brigade, the EUs premiere infantry unit, assigned to defend the city. The ensuing violence would establish Cerbre Landing as the most fierce and costly battle of the Cold War."

Cerbere Landing is a map in Battlefield 2142.

This city Assault map gives EU the high ground, while still providing plenty of cover for the PAC at the coast. A street directly connects the harbor to the command center, with two side trails leading up to the Roadblock area. Though there are only two ways into the base, forest and terrain to the east of the base give attackers access to the base's rear.

PAC's uncapturable base in 16-player mode.

PAC's uncapturable base in 32- and 64-player mode. Because the nearest flags are far from even the furthest spawn point, and on higher ground, there is a chance that the EU can create a stalemate here.

Some servers do not allow the EU deep inside the harbor.

The west path from Harbor leads to a defensive tower and a bombed-out office building. A railgun next to the building overlooks the street. A road leads past here on the way to South Town Center, overlooked by two lots of buildings and a mountain ridge to the north. Two lots of buildings adjoin from north and above, and from south and below.

The east path from Harbor leads up a mountainside, with a set of buildings below and southwest and forest to the east. A mountain to the north (accessible from Roadblock) overlooks the church itself, as well as South Town's raised structures across the street. A stonework wall provides some protection from outside, while still providing a path for vehicles to cross. Just south of the wall is a railgun covering the street.

Two-story structures with wrecked vehicles. The southernmost wall overlooks most of the map further south. Two railguns are present, one covering the eastern street, another watching the flag. The road from Office Ruins continues north on the west side of town. A set of buildings north of here looks over the interior of the center, as well as the paths from Offices and Church.

On 32- and 64-player maps, a third railgun is positioned by the western buildings overlooking the approach from Office Ruins.

Many lines of houses converge at a broken set of hedgehogs and some wrecked equipment. Grated platforms and some large pipes surround the flag. A railgun is set either between one set of buildings, or on the slope leading up to the EU base. From here, the slope to the west provides access to the base's corner; the main road winds around the buildings here before continuing up the east slope. Barriers prevent FAVs from taking the western road to South Town Center. A mountain trail to the west connects the EU Base with South Town Center.

The EU Command Center is the huge structure here, its flag sitting on a third-level platform after two flights of stairs. Infantry can ascend to the top of the structure, which gives a good view of all approach points and parts of Roadblock. EU command assets are located in the surrounding lot. A large field to the northeast gives raiders a chance to get settled behind trees and defensive structures.

All assets are located in the Harbor's south-central region. 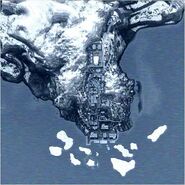