Char 2C is a Codex Entry featured in Battlefield 1, introduced in the They Shall Not Pass expansion. It is unlocked upon obtaining ten kills with the Char 2C. 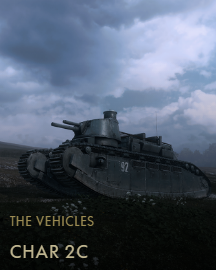 The French Char 2C, or CHar de Rupture 2C ("Breakthrough Tank"), first conceived in 1916, remains the largest operational tank ever made. Weighing in at around 70 tons, it is also the single operational Super-heavy Tank ever, being rivaled only by the German Tiger II tank of WW2. While highly impressive and influential on tank development, the Char 2C missed its opportunity in history and is today a tank shrouded in mystery.

The Super-heavy Tank concept was born out of the unique conditions on the Western Front in WW1, with virtually all belligerents considering enormous vehicles, able to break through the deep defenses and destroy enemy strongholds while being immune to artillery fire. Most were expecting the war to continue into 1919, when these giant tanks would roll alongside masses of smaller vehicles and achieve victory. Some proposed designs, like the German "K-Wagen" and the British "Flying Elephant", would have weighed in excess of 100 tons, with the most extreme concept being the 1,500 ton British "Land dreadnought". Of course most of these designs never left the drawing board, but the French took the concept of the Super-heavy Tank further than any other.

In the summer of 1916, the shipyard FCM in southern France was awarded the contract for the development of what was called a "Char d'Assaut de Grand Modele", but there was competition and argument over which approach to take the concept, and in early 1917 three prototypes in different classes were ordered; The 30 ton "A" version, the 45 ton "B" version and the 62 ton "C" version. A first prototype was built, the FCM 1A, and demonstrated in November 1917 to an impressed crowd. But in early 1918 it was decided to instead go for the heaviest "C" version, considerably delaying the project by requiring completely new prototypes, and 300 Char 2C's were ordered from FCM. Ten had been built by the end of WW1, but they never became operational before the Armistice.

When constructed the Char 2C was an exceptionally modern tank with many novel features. It had a spacious hull with two fighting compartments for its crew of 12, with two machine guns on the sides, and above the forward compartment was the revolving main turret with a 75 cannon and a coaxial machine gun. The turret housed three men and was placed so high that they had to reach it by a ladder and sat in seats suspended from the turret roof. At the rear of the tank was a smaller machine gun turret, and both turrets had stroboscopic cupolas. The 2C's armor was among the thickest of WW1-era tanks, with 22mm on the sides and 45mm in the front. Each of its tracks was originally powered by a separate 200 hp engine via an electrical transmission, giving the massive tank a top speed of 12 km/h. The hull was 10.27 meters long, three meters wide and just over four meters tall. The Char 2C could not be wider in order to allow it to be transported to the frontline via rail, which would prove a fatal flaw in the future.

After the war the French interest in costly war material waned, with every Char 2C costing about 20 times as much as an FT light tank. But in 1921 the ten Char 2C's were finished and adopted mostly as propaganda tools, France being the only country in the world with operational Super-heavy tanks. By WW2 the Char 2C had become obsolete against new tank developments, with its slow speed and giant size make it a formidable target for modern tank destroyers. When the Germans broke through French lines in 1940 it was decided to send the Char 2C's south via rail to prevent their capture, but the train got blocked and the 2C's were eventually destroyed. One of them had been captured by the Germans intact, however, and was sent back to Berlin. At the end of WW2 the captured 2C disappeared, and spawned a myth about it still existing somewhere in Russia.

Retrieved from "https://battlefield.fandom.com/wiki/Char_2C_(Codex_Entry)?oldid=343297"
Community content is available under CC-BY-SA unless otherwise noted.