The Machine Rifle Model 1915 CSRG (French: Fusil Mitrailleur Modele 1915 CSRG), more commonly known as the Chauchat was the standard light machine gun for the French Army during World War I. It was one of the first light, automatic rifle-caliber weapons designed to be carried and fired by a single operator and an assistant, without a heavy tripod or a team of gunners, setting a precedent for several subsequent 20th-century firearm projects, being a portable, yet full-power automatic weapon built inexpensively and in very large numbers. It is infamous for being prone to jamming and its heavy recoil. Despite this, records show the weapon was instrumental to modern tactics later in the war, especially for clearing machine gun nests and providing suppressive fire.

The Chauchat combined a pistol grip, an in-line stock, a detachable magazine, and a selective fire capability in a compact package of manageable weight for a single soldier. Furthermore, it could be routinely fired from the hip and while walking. However, its many design flaws resulted in its replacement in both US and later French service by the BAR M1918 and Mle 1924, respectively.

Battlefield 1: They Shall Not Pass

This item has a Codex entry: Chauchat

The Chauchat is a weapon introduced in Battlefield 1: They Shall Not Pass expansion for the Support class. Two variants are featured in the game.

The Chauchat has higher damage but slower fire rate. Though offering a three-shot kill at close range, it is outperformed by many other light machine guns at longer ranges. However, using the bipod and firing in short bursts can maim or kill soldiers at longer ranges.

The Chauchat’s strength is at medium ranges, where it can go toe-to-toe with many Scout weapons while also avoiding the close range dangers of many of the Assault’s firearms.

"Equipped with a bipod, this basic LMG pattern will quickly regain accuracy due to lower weight."

The Chauchat Low Weight is the default variant of the Chauchat. It is unlocked upon obtaining 50 kills with the Lewis Gun Suppressive and performing 75 resupplies. The low weight’s ability to regain accuracy faster and its improved hipfire makes it ideal for close engagements.

"Equipped with a bipod and telescopic sight, this LMG pattern offers improved accuracy over long distance."

The Chauchat Telescopic variant is unlocked upon obtaining 15 kills in a round with the M1909 Benét–Mercié Telescopic as well as performing 10 kills with the Mortar. The telescopic sight allows the Chauchat to deal heavy damage at longer ranges.

Chauchat in They Shall Not Pass expansion cover

Chauchat in Battlefield 1: Official They Shall Not Pass Trailer

Pulling the magazine out for a reload.

Chauchat without a magazine (mid-reload).

sym.gg
"In World War I, the standard French light machine gun was called the Chauchat. It could be handled by a crew of just two, which was rare at the time. It had many features seen on later LMGs."

The Chauchat is a light machine gun featured in Battlefield V.

The Chauchat is a weapon featured in the Tirailleur singleplayer war story. It is the starting weapon in the chapter, Liberté. Friendly NPCs can also be seen holding the Chauchat though this is uncommon.

The Chauchat also makes an appearance in Combined Arms where it can be found in the level Harbor Headquarters, available at a Supply Station in the Ruins.

The Chauchat was added into multiplayer for the Support kit during the Battlefield V: Summer Update[1]. The weapon was able to be unlocked for free by accessing the Shipments tab in the Armory for a few weeks following the launch of the Summer Update. Following the update, the weapon can be acquired through purchase with Company Coins.[2]

The Chauchat features the highest damage model of all the Light Machine Guns, killing in 3 shots up close before dropping to 5 shots from 50m onwards. This unmatched damage model will allow the weapon to kill enemies at longer ranges with one fewer bullet than the Madsen MG. This high damage comes at the cost of the highest-in-class recoil and lowest-in-class rate of fire; the Chauchat can be difficult to control during sustained fire, and is quickly overwhelmed in close quarters by faster-firing weapons. As such, the Chauchat finds its stride in medium-range combat, providing users with the opportunity to deal serious damage to opponents while keeping safely out of range of more close quarter-oriented firearms. However, sustained fire with the Chauchat is difficult due to its small magazine size of 20 rounds, tied with the FG-42, LS/26 and BAR M1918A2 for lowest capacity in the LMG category - Which is further hurt by its slow reload time which almost takes 4 seconds when partially empty.

With its high damage and low rate of fire, the Chauchat functions almost like a Semi-Auto Rifle for the Support kit, though providing the option to lay down fully-automatic fire when desired. The weapon features a select-fire switch allowing users to swap between fully-automatic and semi-automatic fire; however, with the Chauchat's already-leisurely rate of fire, users may find similar success by tap-firing the weapon.

The Chauchat's specialization tree allows one to focus on either improving the weapon's performance while on the move, or reining in its hefty recoil. Its Rank 1 specializations feature Enhanced Grips to improve the weapon's hipfire performance with Quick Aim allowing faster ADS times. At Rank 2, Custom Stock allows for more accurate aimed fire on the move, while Ported Barrel aims to mitigate the firearm's horizontal recoil. Rank 3 sees users move faster while aiming down sights with Lightened Stock, while Barrel Bedding improves ADS accuracy while stationary. Finally, Rank 4 sees users choose between either Quick Reload or Recoil Buffer, the former speeding up reload times by 15% and the latter helping rein in the violent vertical kick of the Chauchat.

The Chauchat in Tirailleur. Note the missing flash hider on the gun's muzzle.

The Chauchat with the bipod deployed. 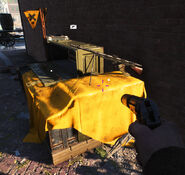 Inspecting the left-hand side of the weapon in Combined Arms.

Inspecting the right-hand side.

The Chauchat without its magazine (mid-reload).

The Chauchat with its bipod deployed.

Inspecting the left-hand side of the Chauchat.

Inspecting the right-hand side.

The 'Mint' skin in The Company.

The 'Gold' skin in The Company.

Chauchat in The Company