100
Chompi functions as a melee weapon and has the same range as a Knife, needing to be within 2 meters of an enemy to hit, but like the Hammers will kill in a single hit. Chompi cannot damage vehicles.

The alligator has a "magazine" of 20 bites, which after expending it will disappear like a normal Battle Pickup. "Aiming" Chompi will switch to a viewpoint from within the alligator's mouth; this does not affect its range or accuracy but does slow the player.

Chompi can be picked up by any players after it is summoned by a player with the Gator Bait, or if it is dropped by the player currently using it. Chompi's model is static when dropped, like a regular weapon, but will despawn after about 30 seconds when dropped like any other Battle Pickup.

In order to summon Chompi, players must first have unlocked and equipped the Gator Rassler patch, which is obtained on the Break Pointe map. A hole may be broken into a sewer inside Big Eddie's wine cellar; holding a dinosaur statue within a gated area. On the other side of the gated area wall, back in the wine cellar, a small gray box that unlocks the gate can be found upon destroying a wine barrel. It can be interacted with upon destroying all 13 toilets located around the map, lifting the gate upon doing so, allowing the player to interact with the dinosaur statue and obtain the patch.

Afterwards the player must equip the patch and go to the Everglades map which holds numerous skinned rabbits that are randomly located around the map. They may be collected by the player by meleeing them if the Gator Rassler patch is equipped. Upon obtaining four rabbits, the gator bait may be laid out next to a swamp area outside the alligator processing building between the Charlie and flag in Conquest which will then attract Chompi. Afterwards, the player will then be allowed to pick up the alligator and use it as a weapon, killing any enemy player with one hit.

The switch used to open the gate is hidden behind a barrel. 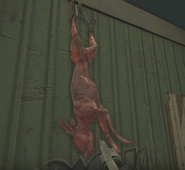 One of the skinned rabbits located on Everglades. 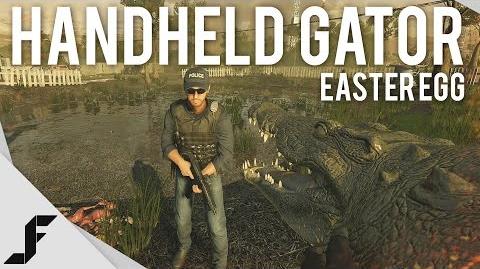