"Dammit, Recker... I almost shot you in the face."

— Pac to Recker in Baku

Sergeant Clayton "Pac" Pakowski is a United States Marine in the US military and member of Tombstone Squad featured in Battlefield 4. Pac also appears in Battlefield 2042's Exodus Short Film.

Pac and the Tombstone Squad (Recker, Irish and Dunn) are sent to Baku, Azerbaijan to retrieve information about Russia and China's relationship. When a trade with RGF operatives goes bad, Tombstone regroups and fights their way to their extraction point. The mission ultimately results in success of capturing the intel, but at the death of their extraction pilot, Hawkins, and the squad leader, Dunn.

Pac and Tombstone were later sent to Shanghai, China to recover VIPs and CIA Agent Kovic in the Zhi Yu Tower. Kovic and the VIPs were found after defeating much Chinese resistance. They were delivered via captured helicopter to the USS Valkyrie whilst Tombstone had to take an alternate transport. As they fought their way through the Chinese military once again, they took passage aboard a civilian ferry to the Valkyrie.

The following day, Pac, Recker and Irish were summoned by Garrison for a briefing of the recent events. Along the way, they witness the USS Titan which had been recently boarded and nearly destroyed. Garrison sent Tombstone along with Kovic as temporary squad leader to investigate. Tombstone retrieved the Titan's voyage recorder and began to return to the Valkyrie, repelling the invaders along the way. The Chinese had already attacked the Valkyrie by the time Tombstone arrived via a DV-15 Interceptor. They had picked up Hannah whilst making their way back to Garrison. The voyage recorder was successfully delivered, but at the cost of Kovic's life.

Tombstone, along with a volunteered Hannah, went to Singapore to fire a flare over Changi Airport for the Valkyrie. They had initially began the assault with several tank elements and other marines, but all were lost and otherwise left behind by the time they reached the airport. Tombstone was successful in firing the flare, but evidently too early as they were caught in the subsequent fire during their escape. While Pac, Irish, and Recker were disoriented, Hannah betrayed them and captured them with several Chinese soldiers. Pac was presumed KIA.

Recker, Irish and Hannah made it to the USS Valkyrie which was currently in the Suez Canal, Egypt. They parachuted onto the runway and counterattacked PLA soldiers. Tombstone eventually met up with Jin Jié, Garrison, and Pac (who somehow survived by "crawling through a thousand yards of shit") in the Valkyrie's medical bay. Jin Jié persuaded the remaining soldiers to stand down, but Chang still posed a threat. Pac stayed aboard the Valkyrie, while Hannah, Recker, and Irish volunteered to deliver a RHIB loaded with C4 to sink his warship. Due to a malfunction, the C4 doesn't explode, and both Irish and Hannah volunteer to go back with Recker's remaining C4 charge to detonate the RHIB manually. Recker chooses one of them, and they manage to destroy Chang's warship, saving everyone aboard the Valkyrie.

"The world wants to forget we exist. We will force them to see."
This section contains spoilers for Battlefield 2042.

By 2042, Pac was still with the United States Armed Forces, and was involved in combat operations against Oz's No-Pat Task Force.

On October 10, 2042, Pac is dispatched to the flooded city of London, England to stop an intelligence handoff between No-Pat agents. He successfully kills one of the agents, but is wounded by the second, who reveals himself to be his former Tombstone squadmate Irish. Now a No-Pat Captain serving under Oz, Irish secures the intelligence briefcase of the other agent and brings Pac back to his ship, the MFS-04 Exodus, for medical treatment.

Pac remains a prisoner on the Exodus, handcuffed to his medical bed. Irish visits Pac on October 20th, who Pac derides as a traitor. Irish simply replies that his loyality is to the refugees on his ship, which now includes Pac. Pac warns Irish that Oz will try and start a world war with the information Irish has recovered and urges him not to hand it over, which Irish does not believe.

However, after Navin Rao discovers that the recovered intel leads to the crash coordinates for a secret American super weapon, Irish realizes that Pac was right and calls off his deal with Oz. In retaliation, Oz attacks the Exodus with three MV38-Condors and has his soldiers board the ship as it attempts to escape in a nearby tropical storm. During the attack, Irish's son Omar is taken hostage by Oz's men. No-Pat journalist Kayvan Bechir, pursuing the soldier who took Omar, encounters Pac in the medical bay. Pac convinces Kayvan that he wants to help, who uncuffs and frees the Marine from the gurney.[2]

Pac acquires a rifle and follows Omar, eventually finding Irish cornered by a Condor and with his son held hostage in front of him. Irish hands over the intel to try and save his son, but Oz still orders that Omar be killed. Before Oz's soldier can pull the trigger, Pac shoots and wounds him, saving Omar. Sharing a last knowing look with Irish, Pac is spotted by the Condor which opens fire, killing him. Irish manages to destroy the distracted Condor with a FIM-33 AA Missile.

Irish later examines Pac's body and recovers his dogtags. After discovering that the intel was sent to Oz before the soldier Pac shot died, moved by his friend's sacrifice, Irish directs his Task Force—and any No-Pats willing to side with them—to take the fight Oz.[3] 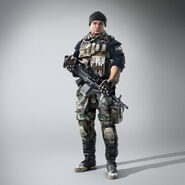 The Battlelog portrait of Pac

Pac character model while in Shanghai