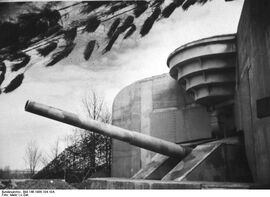 Coastal artillery refers to anti-ship artillery or fixed gun batteries in coastal fortifications. Ranging from the Middle Ages until World War II, coastal artillery was extremely important in naval battles. The advent of 20th-century technologies, especially military aviation, naval aviation, jet aircraft, and guided missiles, reduced the primacy of cannon, battleships, and coastal artillery. In countries where coastal artillery has not been disbanded, these forces have acquired amphibious capabilities. In littoral warfare, mobile coastal artillery armed with surface-to-surface missiles still can be used to deny the use of sea lanes.

It was long held as a rule of thumb that one shore-based gun equaled three naval guns of the same caliber, due to the steadiness of the coastal gun which allowed for significantly higher accuracy than their sea-mounted counterparts. Land-based guns also benefited in most cases from the additional protection of walls or earth mounds.[1]

The Defgun is an emplacement featured in Battlefield 1942 as a neutral anti-ship weapon intended to be used for coastal defense and it can turn to 180 degrees max. It can destroy landing crafts from three to four shots, Destroyers from five to eight shots and several more about battleships and aircraft carriers. However,it is very vulnerable from air attacks or sea attacks because it can't shoot down planes and it can be destroyed also from the cannons of battleships or destroyers, or using Grenades or Explosive Packs as an infantry

This item has a Codex entry: Fortress

The Fortress Gun is a weapon featured in Battlefield 1 on the maps Empire's Edge and Monte Grappa. It is a large artillery weapon found in bunkers on opposite ends of the maps by their respective deployments. On Empire's Edge, the weapon's purpose is to primarily protect the Castello from enemy naval craft, especially the Dreadnought. On Monte Grappa, the two Fortress Guns on the map are located high in the hills where they can shoot down upon the lower valley of the map. The Fortress Gun consists of two barrels which can shoot shells across the map, but at further ranges, gravity's effects pull the shells into a plummet into the ground.

While the bunker that houses the fortress gun offers a great deal of protection, gunners using the Fortress Gun are at risk of being shot if intruders manage to get into the bunker. The Fortress Gun may also be damaged and destroyed by enemy fire which can be tactically advantageous for those who control the Dreadnought. Fortress Guns that are destroyed in previous attacks on Operations do not repair - instead, the turret itself disappears with an open concrete plate where it should be.

The Fortress Gun returns in the Turning Tides expansion, appearing on the map Heligoland Bight. The lone gun is the only stationary anti-ship emplacement on the map, and is found near Bunker Beach (objective C).

A Fortress Gun on Empire's Edge

Top down view of the Fortress Gun

A Fortress Gun on Monte Grappa

View of a player using the Fortress Gun

Weapon sights of the Fortress gun engaging against an enemy Dreadnought

Battlefield 1: In the Name of the Tsar

The 305/52 O Coastal Gun is a second form of coastal artillery that is featured in Battlefield 1: In the Name of the Tsar, primarily on the map Albion. The gun is modeled after the Obukhovskii 12"/52 Pattern 1907 coastal gun variant.[2] It is a very large structure, reflecting its origin as a dreadnought battery.

The gun can be used with both first- and third-person cameras. While in first-person mode, the gunner uses a direct-fire sight that automatically adjusts the gun to hit the reticle target, instead of having a fixed zero like other weapons. In third-person mode, the player can use indirect-fire mode to place shots, controlling the elevation of the gun while the minimap shows the approximate target area. Like the FK 96 field gun, the Coastal Gun can be turned faster by pressing ← or →.

The operator position is located on a high platform, with controls directly to the right of the gun. Pressing Enter/Exit vehicle has the player automatically climb the left-side ladder, preventing other players from using the ladder or platform. When exiting the vehicle, the player appears back at the left side of the gun base. Should the gun be destroyed, the player may survive, and is ejected to the same exit position.

The operator is exposed to enemy fire. Infantry behind and to the right of the gun may have a clear shot from the ground, while players with long range weapons may be able to fire through the front viewport. Attacks from above by grenades or ordnance are also dangerous to the operator.

The weapon can be repaired by anyone with a Repair Tool, though the gun offers no self-repair ability to the player currently operating the weapon.

The SK45 Coastal Cannon was added to the game in the January Turning Tides update. It is found only on the map Zeebrugge, with four such guns available for use - two on the coastline around Lubeck Battery, and two more at either end of the seawall along the north side of the mole. The gunner uses a pre-set magnification sight to aim. Unlike the Fortress Gun and 305/52 O Coastal Guns, the SK45 has much lower health and lacks a gunshield, making the gun relatively easy to disable either by destroying the emplacement or killing the exposed gunner.