Cogwheel Club is a Codex Entry featured in Battlefield 1, introduced in the They Shall Not Pass expansion. It is unlocked upon obtaining ten kills with the Cogwheel Club. 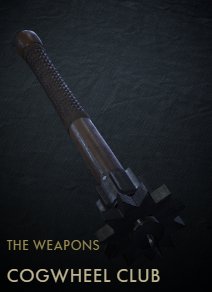 As soon as it becomes clear that the rifle was not the best weapon for close combat fighting in the trenches, soldiers looked to the revolver and later the shotgun. But their drawback was that they alerted the enemy during trench raids. Learning from their medieval predecessors they armed themselves with an array of primitive weapons such as this club.

Retrieved from "https://battlefield.fandom.com/wiki/Cogwheel_Club_(Codex_Entry)?oldid=343204"
Community content is available under CC-BY-SA unless otherwise noted.