Not to be confused with Cold War (Singleplayer)

Cold War is a map featured in Battlefield: Bad Company 2 as part of VIP Map Pack 7. The map layout is almost identical to the one in the singleplayer campaign. The map takes place somewhere in the Chukotka Peninsula in Siberia. This map was announced as an infantry-based map focusing on CQC as seen on the official Battlefield blog. After the events of the campaign, the Russians decided to counter the American forces who managed to secure the area.

In their hunt for a high value target, Bravo Company pushed deep through Russian territory in Chukotka. The Russians have recovered from the surprise assault and now move to counter attack in order to push the Americans back across the frozen river. Tight infantry fighting is expected in the close quarters of the snow covered streets. Both sides are prepared for heavy casualties.

There are three bases within the map and all bases are heavily focused on infantry combat. There are several flanking routes for the attackers while the defenders have HMG emplacements and narrow corridors to funnel enemies. Both sides may face heavy casualties. 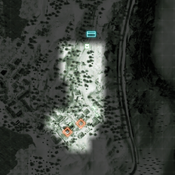 The Attackers parachute onto a large hill which eventually goes down toward the defenders base. Objective Alpha is located next to a building and is covered by a dumpster. Objective Bravo is held in a two-story building and can be collapsed. The defenders have HMGs that can cover parts of the hill and the objectives. The M939 truck spawns right at the bottom of the hill but only once. Both the attackers and defenders can use the mountain ranges surrounding the map. The attackers can parachute onto the mountains next to the hill and the defenders can use the mountains behind them to counter the attackers. 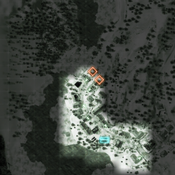 Once the attackers destroy the first two objectives, there will be a small setpiece where the radio tower is bombarded and then knocked down. The objectives are on the far left and far right side of the map.Objective Alpha is located between two buildings on one side of the map and Objective Bravo is also located between two buildings on the other side of the map. Neither M-COMs can be destroyed by Destruction 2.0. The defenders have a greater advantage in this base since the defenders can use the buildings behind the objectives and the narrow paths to decimate the attackers. The attackers should stick to either sides of the map to flank their opponents. There is one HMG but this is easily avoided by the attackers.

The battle will intensify as both sides will try to gain ground. Extreme close quarter combat is expected as both sides will often have to fight building by building. Objective Alpha is behind a row of buildings and Objective Bravo is within a collapsable building. The defenders are given a HMG that can be effective. However, the attackers can maneuver behind the HMG or destroy it so this may not last very long. The attackers will most likely come in head-on and will be difficult to halt. The defenders will most likely be in fortified positions behind the objectives. There is a corridor leading to Objective Alpha but taking this corridor is suicide for the attackers. The attackers still have access to the frozen lake and the buildings next to it but this area can also be risky. The most reliable path is the hilltop next to Objective Alpha, since the attackers have the higher ground, which allows them to easily jump down and surprise the defenders even if they are well prepared. Both sides are likely to take heavy damage as both sides will be desperate.

Located at the same area as Kirilenko's Takeoff.

Located at part of the main road between the Town Center and Kirilenko's Takeoff.

The first M-COM is located right near the only square house in the area.

Located at the same area as the Town Center.

The second and last M-COM is located near the small garden at center of the area.

When this M-COM is blown up, the radio tower is bombarded at the post-game screen.

The area used for this mode takes place around the Town Center.