Colonial Troops is a Codex Entry featured in Battlefield 1. It is unlocked upon obtaining three kill assists in multiplayer. 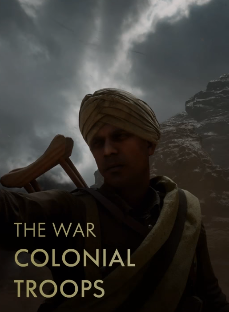 As the great empires of Europe went to war, so did their colonies throughout the globe. France brought Zouaves from Africa to Flanders; Britain brought in Gurkhas from India, Canadians, South Africa, and ANZAC - the Australian and New Zealand Army Corps.

In Africa, German colonial troops - the Schutzhuppe - fought for their existence against Belgian, British, French, and Portuguese attackers. Russia brought troops from Siberia to Europe, the Chinese Labour Corps worked behind the lines on the Western Front, war flared throughout the Middle East. Millions of men from every corner of the globe fought in what was truly the first WORLD war.

Retrieved from "https://battlefield.fandom.com/wiki/Colonial_Troops_(Codex_Entry)?oldid=343313"
Community content is available under CC-BY-SA unless otherwise noted.