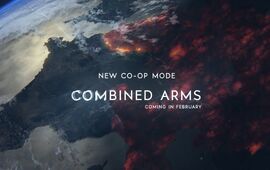 Combined Arms is a gamemode featured in Battlefield V and was introduced in the second Tides of War chapter, Lightning Strikes on February 13th, 2019.[1]

The mode allows up to four players to engage against AI enemies in surgical strikes on objectives. Combined Arms is intended to allow players to improve their experience with teamwork and become familiar with aspects of multiplayer.[2]

Combined Arms functions as a hybrid of the War Story and Multiplayer modes of Battlefield V, following a linear story-line with gameplay mechanics from both modes. Combined Arms pits players against AI controlled Bots as in the campaign, providing various scenarios and objectives to complete along the way. In order to complete levels, players must complete these objectives and prevent their squad from being wiped. The mode can be played either in solo or as a squad of up to four players. A matchmaking system was added on May 2nd, 2019.[3] Combined Arms has three difficulties: Easy, Medium, and Hard. Completing a level will reward players with one time payments of 500

based on the difficulty respectively.

Upon starting a level, players are given the option to select one of the four multiplayer classes. From there, players can utilize any weapon, gadget, or cosmetic they have unlocked in The Company. Players only have one life in each level of Combined Arms, requiring adequate teamwork in order to succeed in harder difficulties. Like multiplayer, players obtain requisition points for killing enemies, which can be used to request unique Squad Reinforcements.

Upon completion of one of the aforementioned objectives, players must then reach the extraction point on the map. After reaching the extraction point, players are then given 30 seconds to fortify their location. At the end of the 30 seconds, players are tasked to survive against an endless wave of enemies for the next three minutes. Should players manage to survive this countdown, the level will be successfully completed.