— Description of Commando in Launch Trailer 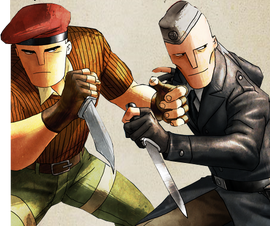 The Commando is a class in Battlefield Heroes. It is very similar to the Recon and Special Forces kits of other Battlefield titles. The Commando has the choice of using a Knife, a Sniper Rifle, and a Pistol as main weapons. The Commando can use Sticky TNT or a grenade launcher as their explosive. They also have the unique ability to cloak themselves to become almost invisible. The Commando class can do the most damage per hit, and is the fastest of the infantry units (without using speed-up abilities). Despite this, it is the weakest class in damage, dealing only 80 hit points.

National Army Commando.
Add a photo to this gallery

The Commando Class has 6 abilities:

Retrieved from "https://battlefield.fandom.com/wiki/Commando?oldid=373643"
Community content is available under CC-BY-SA unless otherwise noted.