Battlefield Wiki
Register
Don't have an account?
Sign In
Advertisement
in: Standard, Mechanics, Features of Battlefield 2,
and 8 more

The Commo Rose is a feature in the Battlefield series. By pressing and holding the Spotting button, the Commo Rose is brought up, with several options being displayed in a ring.

The Commo Rose allows a player to quickly send pre-set messages to other players much faster than the original method of sending messages and spotting, which was via the function keys. The Commo Rose is helpful for players who don't have headsets with microphones. Some commands cause icons to be displayed for teammates, alerting them of your status.

The Commo Rose presents a few different options for players in vehicles.

Tactical Rose messages may result in special icons for the commander if requested by a squad leader.

These special commands allow a Commander to place orders or assets at a specific location:

The Commo Rose was first introduced in Battlefield 2 with American, MEC, Chinese, Russian and EU Voices, depending on the playing faction or settings. The Commo Rose replaces the function key bar visible along the top of the screen in prior Battlefield titles.

During a BattleRecorder playback, a special rose offers playback commands.

Prior to Battlefield 2, commands were mapped to the function keys, which are now only used to switch vehicle positions.

The Commo Rose returns in Battlefield 2142 with EU and PAC voices with the same commands like in Battlefield 2 but with different looks. Right-clicking the "Spotted" message brings up a list of infantry roles and vehicles, allowing hidden threats to be warned against.

A separate Tactical Rose contains commands for coordination between squad leaders and the team's commander. It can be accessed by pressing and holding T on the keyboard.

Commo Rose appears in a more streamline, compact form in Battlefield Play4Free. It takes the form of rectangular shapes unlike the hexagonal form the other games appear with and consists of only more important commands.

The Commo Rose is refined in the PC version of Battlefield 3, and is stacked with the Spotting feature. Commands related to support actions are made available by spotting teammates, allowing players to request aid more quickly. Players can also offer support if they have an appropriate gadget equipped.

The Commo Rose returns in Battlefield 4, but for the first time for consoles. It is activated by holding Spot/Commorose (Default: R2 for PS3, R1 for PS4, RB for Xbox 360 and Xbox One) and selecting the desired command with the right analogue stick.

Like previous games, the player will have a corresponding voice response in the faction's language, but commands will also appear in Team and Squad chat, similar to Battlefield 2. The Commo Rose is made up of rectangles as opposed to the hexagonal shapes of previous games and is grey in color.

Items formerly on the Tactical Rose, such as requesting or giving orders, have now been added to the bottom of the Commo Rose instead and the center Spot command has been removed (though it remains functional).

Like Battlefield 3, the player can also request or offer support actions without bringing up the Commo Rose and can just press Spot/Commorose once while looking at a teammate who is in need of or is able to perform the action. Squad Leaders can also mark objectives for attack or defense this way, with a voice command played and a title prompt shown.

In a late January 2014 patch, a chatfeed was implemented for console versions of Battlefield 4 that show commands issued by players.

The commo rose is missing the Need Backup and Follow Me commands from previous games, making the chat feed on PC, or VOIP communications the only way for players to specifically request these things in-game. 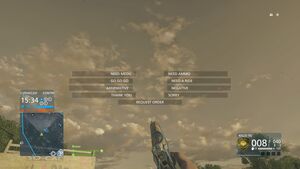 The Commo Rose is featured in Battlefield Hardline, functioning in a similar manner to the Battlefield 4 counterpart.

The Commo Rose is refined in Battlefield 1, with commands now nested into three groups. "Requests" contain all requests, while "Social" contains voice responses such as "Thank You" and "Go, Go, Go".

A third group, "Orders", allows squad leaders to issue orders to any of the gamemode objectives without having to look directly at the objective, and to see where other squad leaders plan on attacking/defending. Squadmates can use this panel to request orders. If no order is given within 30 seconds, the squadmate who requested orders is granted leadership over the squad. 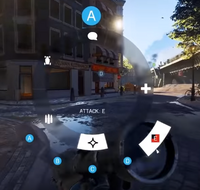 The Commo Rose returns in Battlefield V, functioning in a similar manner as past installments, but using icons in its design instead of text commands, and different-sized landing zones for the command groups.

On-foot interactions are limited to responding positively (✔), negatively (✘), saying thank you (🖒), ordering an advance (⮉); and requesting health, ammo and orders. In vehicles, request for repairs as well as get in and get out commands replace the other requests.

A separate Tactical Rose (last seen in Battlefield 2142) is available to squad leaders using the Camera button while on foot. This rose allows them to track squad progress towards Squad Reinforcements, and to select a reinforcement once available.

Continuing with changes made in Battlefield 1 and Battlefield V, Battlefield 2042 will use a nested Commo Rose for issuing objectives. Commands are now presented in an eight-position chart, with both text and icons. Pressing Melee will now present a second page of commands.

Some new commands were featured in a short:[1]