The HK45C, or Heckler & Koch HK45 Compact, is a compact pistol designed by German firearms company Heckler & Koch in the early 2000s. It fires the large .45 ACP cartridge and can utilize 8 to 10 round magazines. It features an ergonomic design and has many more tactical options compared to earlier HK models. The HK45CT (T stands for Tactical) variant includes a threaded barrel for use with barrel modifications like Suppressors, a picatinny rail, and customizable backstraps to better fit a shooter's hand.

The Compact 45 is a pistol featured in Battlefield 4, and is the last to be unlocked, at 57,000 Handgun score.

Like the M1911, it has moderately high damage, taking 3-7 hits to kill. Compared to the M1911, it has the advantage of three more rounds in its magazine and a faster rate of fire by 10 rounds per minute, but the M1911 is much more accurate with slightly lower recoil.

Like the MP-443, M1911 and FN57, its recoil kicks straight up, and very little to either side. This makes the Compensator largely unneeded, while the Muzzle Brake could be useful for reducing vertical recoil.

Before the Fall patch, its low muzzle velocity of 250 m/s was worsened to 160 m/s with Suppressor, reducing its effectiveness at range.

After the Fall patch, its unsuppressed and suppressed muzzle velocities have been increased to 270 m/s and 230 m/s, respectively. 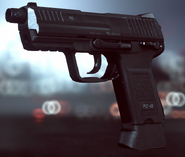 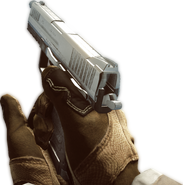 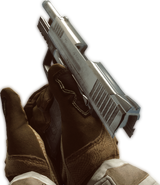 Battlelog
"The 45T is a polymer-framed handgun with great control due to its ergonomics. it has high recoil but skilled users can master this sidearm."

The 45T is a sidearm featured in Battlefield Hardline.

The 45T is carried by Khai Minh Dao in most episodes, and is always carried by Carl Stoddard. It can rarely be found carried by criminals.

The 45T can first be found on an enemy during the building raid at the end of the third episode. Once it has been picked up, it can be selected for the player's loadout in any episode.

It is one of the high damage handguns available for the Enforcer kit, and is the default sidearm issued to the kit. The weapon comes equipped with a Mini (RDS) sight by default.

The HK45C as it appeared in the Battlefield Hardline: 6 Minutes of Multiplayer Gameplay Trailer

Retrieved from "https://battlefield.fandom.com/wiki/Compact_45?oldid=362860"
Community content is available under CC-BY-SA unless otherwise noted.