Comrades is the sixth mission in the single-player campaign of Battlefield 3. The player takes on the role of Dimitri Mayakovsky for the first time. The mission is set in the EURONEXT stock exchange in Paris, France.

Three GRU operatives begin by infiltrating the PLR staging area for the gas attack, the EURONEXT Paris Stock Exchange. The trio - Dima, Kiril, and Vladimir - make their way through the parking garage of the building, but the pretense of stealth quickly vanishes and they begin engaging the PLR hostiles directly.

Once inside, the agents move and clear various offices and rooms, killing all of the PLR enemies to be found. As they move, they try to stay within range of Dima's jammer, which would prevent the nuclear weapon from detonating. However, as they find the bomb carrier on the basement area, the man flees, and subsequently begins the gas attack, prompting the GRU agents (and any PLR operatives remaining) to put on the gas masks they had brought along. The gas begins to seep in through the walls, and very quickly, kills anybody who does not have a gas mask. Such is the case that dead civilians found everywhere the building were the ones trapped in the gas attack, as hinted by Vladimir.

Chase on the building

The GRU agents continue to move and pursue the bomb carrier from the different areas of the building, with the chase starting from the gas attack, to different office rooms, and up the main control room up to the main entrance.

Chase on the streets

When they come across a PLR assault on the police who had taken up a position outside the Stock Exchange, initially the GRU agents wait, believing the police would drive the carrier back towards them. However, as Dima attempts to apprehend the carrier, he turns again and successfully darts through the police blockade, leaving the GRU agents and the remaining PLR operatives to contend with the Gendarmerie. Dima and the others attempt to move quickly through the wreckage and abandoned cars where the police are taking cover. They engage and kill any of the police who stand in their way, including several GIGN officers who arrive on scene to assist the police officers on scene.

As the GRU agents come near to catching the operative, whom had taken off down a small alley, an RPG streaks by, nearly striking Dima and Kiril, and destroys a bus behind the two. Vladimir is stuck by a large piece of shrapnel and from the blast itself which impales him through the chest. As he dies, Dima moves Vladimir to rest up against a wall, and then continues with Kiril, although he is temporarily shell-shocked from the RPG explosion.

Dima and Kiril keep moving after the bomb carrier, killing anybody who gets in their way, even as the PLR and Gendarmerie trade fire in the streets. Finally, Dima manages to catch up to the carrier. After a melee fight, Dima kills the operative by tossing his body onto the nearby metro tracks, causing him to be run over by an oncoming train. Dima and Kiril then open the duffel bag the nuclear weapon was supposed to be in, only to find it was a ruse. After several seconds, the real nuclear weapon detonates some distance away at the EURONEXT exchange. 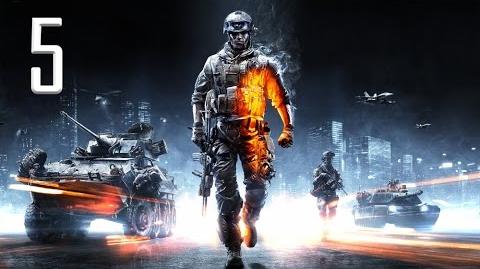 Retrieved from "https://battlefield.fandom.com/wiki/Comrades?oldid=336655"
Community content is available under CC-BY-SA unless otherwise noted.