Battlefield Wiki
Register
Don't have an account?
Sign In
Advertisement
in: Standard, Bow and Arrow, Gadgets of Battlefield 1, Grenade Launchers 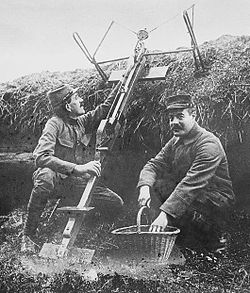 The Arbalète sauterelle type A, or simply Sauterelle (French for grasshopper), was a bomb-throwing crossbow used by French and British forces on the Western Front during World War I. It was designed to throw a hand grenade in a high trajectory into enemy trenches. It was initially dismissed by the French Army but General Henri Berthelot thought it had practical value. It was lighter and more portable than the Leach Trench Catapult, but less powerful. The Sauterelle replaced the Leach Catapult in British service until they were replaced in 1916 by the 2 inch Medium Trench Mortar and Stokes mortar.[1]

"With Giant’s Shadow comes the Grenade Crossbow, a powerful addition to the Support class’s arsenal. Based on one of many unique contraptions from the Great War, this gadget can silently fire two grenades of either the Fragmentation or High Explosive variety."

The Crossbow Launcher is a gadget featured in Battlefield 1 for the Support kit. It was made available in the Giant's Shadow update. As the name suggests, it is a Crossbow that allows players to silently fire different types of grenades at enemies.[2]

Grenades launched from the crossbow explode shortly after hitting the ground, no matter their trajectory.

Two ammo types are available for the crossbow: Frag and High Explosive. They are functionally the same as those available for the Rifle Grenade used by the Medic class. Although the frag grenade inflicts more maximum damage, the HE grenade will explode on impact with a vehicle.

Like the mortar, the crossbow launcher automatically resupplies its own stock of grenades without the need for Ammo Crates or Pouches. A grenade is replenished after 15 seconds.

Crossbow Launcher with the projectile in the cup, ready to fire.

Once fired the cup holding the grenade will be at the edge of the crossbow if there is no ammo available, if so the user will pull back the bowstring.

Pulling back the bowstring.

Putting a grenade into the cup.