Crossbow Launcher is a Codex Entry featured in Battlefield 1. While the weapon itself was added in the Winter 2016 update, the codex entry was introduced alongside the Battlefield 1: They Shall Not Pass expansion. It is unlocked by obtaining ten kills with the Crossbow Launcher. 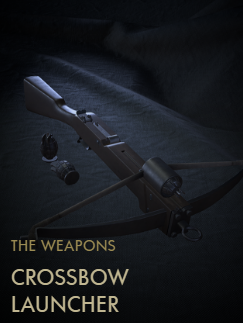 The enormous and unexpected challenges of Industrial war put all combatant nations in strained situations, finding themselves lacking enough weapons suitable for the trench warfare that had settled on the Western Front in 1914. The prevalence and proximity of the trenches called for many more grenade throwing weapons than were available early in the war. This led to many peculiar sights on the battlefield, with antique mortars and fuse lit "hand bombs" making a reappearance, as well as a slew of improvised throwing devices and hand grenades.

Among the many different catapult-like weapons deployed as stopgaps before modern trench mortars arrived in numbers, another antique weapon type would once more be put into action; the crossbow. In this war the crossbow was not used to fire arrows however, but instead to launch grenades into enemy trenches. The Arbalete Sauterelle type A (French for grasshopper) was essentially a large crossbow, weighing in at 24 kg, which launched regular French or British hand grenades up to 140 meters. Designed by a French artillery officer in early 1915 the Sauterelle was fired by leaning it up against a trech wall or slope, launched the grenades from a cup and was operated by one or two men. Despite its crude and outdated appearance, it performed well and was appreciated by the Allied troops before light mortars like the Stokes could replace the various catapults.

Besides there large and stationary crossbows, the actual antique portable variant saw action too. Before the war crossbow shooting was a popular sport in Europe, and already in 1914 such "Brotherhoods of crossbowmen" from northern France and Picardy would begin using both their modern sporting crossbows and antique ones to launch grenades against the Germans. In order to launch a grenade from an unmodified crossbow you need something like an arrow, and the crossbowmen improvised such projectiles by wiring sticks of explosives together with spikes or scrap to a stick. This explosive arrow could be launched around 80 meters. Early rifle grenades were mounted on a long steel rod for the barrel, and these were also used as projectiles for crossbows.

As was so common in the ever-changing environment of WW1, many types of weapons were improvised in workshops close to the trenches, and all sides also produced crude copies of the 15th century crossbows, specifically designed to launch grenades. Some trench raiders and storm troopers kept on using crossbows through the war to silently launch grenades at the enemy during raids.

Retrieved from "https://battlefield.fandom.com/wiki/Crossbow_Launcher_(Codex_Entry)?oldid=343209"
Community content is available under CC-BY-SA unless otherwise noted.