"This is the second competitive mode. In Crosshair, a former criminal turned state’s witness is on the run from his former crew. The criminals are trying to erase the VIP’s face from the world, while the cops are trying to get him out safely. Once again, there are no second chances – one death and you are out for the match." 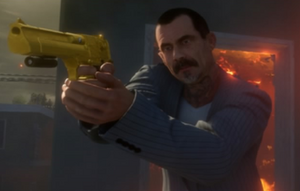 Crosshair is a gamemode featured in Battlefield Hardline. Two teams of five race against a three-minute timer to either extract a player-controlled VIP at one of two designated locations as Law Enforcement or to either eliminate the VIP, or make time run out as Criminals. The gametype features no vehicles, and like Defuse and Rescue, players only have one life per round.

The VIP himself is equipped with a Bald Eagle pistol that can cause heavy damage toward criminals, and has Body Armor to increase survivability. Stealth becomes an invaluable tool in this gamemode, as the death of the VIP means an automatic loss for the Law Enforcement. The VIP can also access Weapon Lockers for his team's advantage, forcing the Criminals to act aggressively toward the opposing team.[1]

Retrieved from "https://battlefield.fandom.com/wiki/Crosshair?oldid=284291"
Community content is available under CC-BY-SA unless otherwise noted.