A Cruise Missile is a self-propelled aircraft containing a significant explosive payload. It is designed to fly itself to a predetermined target, usually by multiple means of guidance. Upon reaching its target, it explodes, causing massive damage to local infrastructure, killing or maiming any living being within the blast radius and surrounding area.

One such example is the Tomahawk Missile, a long-range, all-weather, subsonic cruise missile introduced by General Dynamics in the 1970s designed as a medium-to-long range, low altitude missile that can be launched from a surface platform.

Damages/Destroys all enemy vehicles, equipment and infantry within the blast radius

The Cruise Missile is a main asset commander resource in Battlefield 4 that is obtained by owning a specific control point in Conquest gamemode. It replaces Artillery as a strike asset from past games and was first seen on the Siege of Shanghai map launched from one of the background warships during the Battlefield 4: Official Commander Mode Trailer

The Cruise Missile will hit its target about fifteen seconds after launch, inflicting heavy damage in a wide radius around the point of impact.[1] Though highly unlikely, cruise missiles can impact against aircraft, causing it to explode in midair.

An incoming cruise missile can be defeated by disrupting the target area with an EMP UAV. The EMP does damage over time, and so may fail to destroy a cruise missile that merely passes through its active area. Players (including the Commander) can earn points for damaging or completely destroying a cruise missile. A Proxy Attack can also be used to instantly neutralize a cruise missile, though no points are awarded for doing so.

Another commander resource—Evac Order—can be used to warn any subordinates within the vicinity of the predicted flight path.

Vehicles with anti-aircraft capability can also intercept the missile. The only confirmed rockets capable of locking onto and destroying the Cruise Missile are the Heat-seeking and Passive Radar missiles. Although highly unlikely, conventional weapons can destroy cruise missiles as well, even with only a single .45 bullet from the Mare's Leg.

The Bomber on China Rising maps can unlock the Cruise Missile as a secondary weapon by completing the "Mother of all Bombs" assignment. The cruise missile will continually track the operator's reticule, in a manner similar to wire-guided missiles (e.g. BGM-71 TOW). In terms of damage, cruise missiles launched from Bombers differs slightly from the Commander Asset Version, as it cannot instantly destroy enemy vehicles, but can still instantly kill all infantry outright within the blast radius' effective range.

Batteries of anti-ship cruise missile launchers are present in all Carrier Assault game modes in Battlefield 4: Naval Strike available to all factions. After point capture by a team, the missile battery fires cruise missiles against the opposition's carrier in intervals for every 15 seconds dealing 1 unit of damage per missile. The missile however, does not deal splash damage towards other vehicles or infantry.

Commander view of the missile

A cruise missile an instant before hitting Bravo objective

The same missile performing a direct hit on Bravo 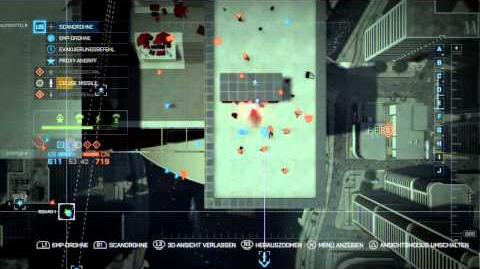