The Armsel Striker is a South African revolver-like shotgun designed by Hilton Walker of the Sentinel Arms Company, originally stationed in Rhodesia (now Zimbabwe). With the original design having flaws, Walker redesigned the weapon in the 1980s, resulting in the Protecta and Striker-12 models that have found their way around the world today. A lower-end clone called the Street Sweeper also exists.

In the Battlefield series, variants of the Striker shotgun had appeared under the name DAO-12. DAO-12 is short for Double Action Only 12 gauge, referring to the weapon's operation and caliber.

3.2
"The DAO-12 has a big revolver-style cylinder holding 12 shots which is a large number compared to other automatic shotguns. This shotgun is extremely effective in close range encounters."

The DAO-12 is the Tier One unlock for the Anti-Tank in Battlefield 2. Unlike the other unlocks, the DAO-12 is in a completely different weapon category from the other Anti-Tank kit weapons, which all are submachine guns.

The DAO-12 possesses the lowest damage values out of the shotguns, being completely incapable of killing in one shot, although it also has one of the highest magazine capacities out of all the shotguns and a high rate of fire. As it is reloaded shell-per-shell, the shotgun has a very high reload time.

The DAO-12 on the map Ghost Town

Iron Sights of the DAO-12

US Anti-Tank kit armed with DAO-12 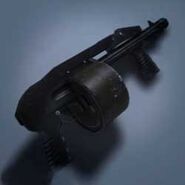 Short
"A Battlefield 2 classic, originally developed in South Africa, the DAO-12 is essentially the combination of a revolver and a Shotgun. The fixed drum magazine is made of individual chambers, each holding a single round, which are fired only when placed in line with the barrel. A spring winding mechanism makes reloading an empty weapon a time consuming process and the short barrel results in a wide pellet spread."

The DAO-12 is a weapon featured in Battlefield 3. The shotgun fires in semi-automatic mode and has a rate of fire of 220 rounds per minute, or 180 rounds per minute if firing 12 Gauge Frag rounds; firing rapidly produces mild recoil. It has magazine size of eight rounds or twelve with Extended Magazine (regardless of any previous rounds inside).

The DAO-12 is used by the private guards in the mission Kaffarov. It can be found on several enemies during the later part of the level. The attachments most commonly include Extended Mags and Russian Optics.

The DAO-12 is available in the level Hit and Run. It is located at the point where the door is stuck and the players must defend the location, next to the ammo crate on the side of the window. It does not feature iron sights.

The DAO-12 is an All-kit weapon unlocked at Rank 38 or by having the Physical Warfare Pack.

Due to the DAO-12 firing semi-automatically and having a cylinder feed, it has a high magazine count compared to other semi-automatics, however is plagued with having a slow reload time. Its reload time is around 0.69 per shell (on average around three rounds for every two full seconds), however it can fire between reloads, making it rather useful when reloading on the run.

The DAO-12 fires the same amount of pellets as the Saiga-12K, but starts with a larger magazine size at 8 shells that only gets larger with Extended Magazines at 12 shells, outpacing the Saiga-12K by one shell in each case at the cost of a longer reload.

With any ammunition loaded, the DAO-12 can kill in as few as one shot, however, it generally takes one or two shots to bring a target down, with the potential to take multiple targets down with two or more shots.

With 12 Gauge Slugs or 12 Gauge Frags, the DAO-12 can be used at much further ranges as more of a high-power, semi-automatic rifle, at the cost of losing its edge in close quarters. It requires at least two shots to kill, while it can take up to four at longer ranges.

Equipping a 3.4x, 4x or 6x scope can help increase the effective range of the weapon on maps with larger sight lines, but players using these scopes will need to account for bullet drop against targets at long ranges. It's also worth noting that slugs have a very slow travel time and have a small effective range.

At close range, optics are of much less concern as the DAO-12 with Buckshot or Flechette generally does not need to be aimed, although it will be more accurate if the player chooses to do so. A Laser Sight can improve its hip-fire accuracy a decent amount as well, and before the 1.04 Patch that came with Close Quarters, it was more accurate to fire from the hip while stationary than to aim down the sights.

A Flash Suppressor can help lower recoil for multiple shots at longer ranges with Slugs or Frags, or to decrease the player's firing signature in close range in darker areas when firing due to the flash from the weapon when firing being significantly reduced.

Extended Magazines is an option for close quarters as it gives the DAO-12 four more rounds in the cylinder and allows it to be able to fire more often and reload less often while still having the same ammunition count as without them applied.

Note that Extended Mags give the DAO-12 one of the longest reloads in the game for a complete top-up. A Tactical Light can also help at close ranges to potentially blind targets, especially those with IRNV scopes, and to get the edge over them in close ranges if the player is assaulting a well defended area such as an objective in Rush.

The DA0-12 in Battlefield 3 with complete specs

The DAO-12 as it appears in Battlefield 3 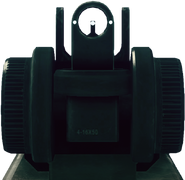 Right side of the DAO-12

24 + 12
"A Battlefield 2 classic, originally developed in South Africa, the DAO-12 is essentially the combination of a revolver and a Shotgun. The fixed drum magazine is made of individual chambers, each holding a single round, which are fired only when placed in line with the barrel. A spring winding mechanism makes reloading an empty weapon a time consuming process and the short barrel results in a wide pellet spread."

The DAO-12 is a weapon featured in the Battlefield 4: Second Assault expansion. It is unlocked upon completion of the Dead Stop assignment.

The weapon is unique due to it having the largest magazine capacity of the shotguns aside from the UTS-15, which holds 14 + 1 rounds, coupled with a relatively high rate of fire due to its semi-automatic action.

However, reloading is done per shell, and after each new shell is inserted, the drum magazine must be revolved manually, effectively doubling the reload time per shell. Coupled with its high magazine capacity, this can make full reloads very time consuming.

The DAO-12 has a permanently attached Ergo Grip, similar to Vertical Grip for SR-2 and Suppressor for AS Val. Because the DAO-12 has 12 rounds capacity and the gun is semi-automatic, the DAO-12 excels at hip firing. The default iron sight is usually good for room clearing or close quarters battle, but the player can attach red dot optics for quicker target acquisition, and attach laser sight to make the DAO-12 even better at hip firing. 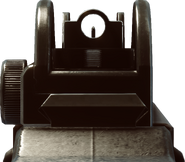