The AK-12/76 is a proposed variant of the AK-12 configured to fire 12 gauge shotgun shells. Along with a .308 DMR variant, the 12/76 is one of two versions of the AK-12 that were expected to be exported to the United States for civilian purchase.

A version of the AK-12/76 using the standard AK-12 magwell appears in Battlefield 4 named the DBV-12.

The DBV-12 has similar stats to the Saiga 12K except for the magazine capacity where the DBV-12 has two additional shells. This is balanced out by the fact that the DBV has slightly more vertical kick than the Saiga. Also, the Saiga fires one additional pellet per shot compared to the DBV-12. 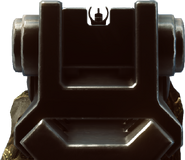