DR. 1 is a Codex Entry featured in Battlefield 1. Detailing information about the Fokker Dr.I, it is unlocked by obtaining twenty kills with Fighter planes.

THE DR. 1 - THREE WINGS TO RULE THEM ALLEdit 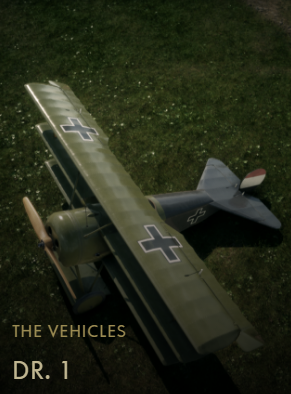 In 1917, this German plane offered exceptional maneuverability but it was also considerably slower than Allied fighters from the same year. The wing design also allowed for reduced wing surface on each wing - an advantage in cockpit visibility.

Firsthand accounts tell of 7 allied pilots flying in behind Werner Voss's DR.1, lining up and having Voss in their sights, when Voss executed spectacular sliding flat turns. He was literally turning the plane in the opposite direction of flight for brief moments, allowing him to fire bullets back towards the chasing pilots. Voss managed, even though outnumber 7 to 1, to put bullets in all seven allied planes engaged in this legendary dogfight.

One of the allied pilots wrote in a letter "I take my hat off to Voss, he was the bravest fellow and the best scrapper I have ever met."

Retrieved from "https://battlefield.fandom.com/wiki/DR._1_(Codex_Entry)?oldid=343285"
Community content is available under CC-BY-SA unless otherwise noted.