The Daihatsu-class landing craft (Japanese: 大発 Daihatsu; short for 大型発動機艇 Ōgata hatsudō-ki-tei; English: Large Motorized Boat) was a Japanese type of landing craft used by special forces of the Imperial Japanese Navy during World War II. It was similar to the LCVP with a bow ramp that allowed soldiers to disembark once the vessel is beached.

In Battlefield 1942, the Daihatsu is the Imperial Japanese Navy's standard landing craft. It is the counterpart to the USMC LCVP. Although the Daihatsu's and LCVP's performance are almost identical, the Daihatsu has several differences. The most notable is the driver cabin which makes the driver less exposed to enemy fire, but the gunner is exposed a lot more than in the LCVP. The Daihatsu also has a different ramp. Unlike its counterpart, the Daihatsu has its door folded in two, which lengthens the opening time, but if half-closed, the doors will offer a lot more cover to the passengers than the LCVP. The Daihatsu has space for 6 people: one driver, one gunner with an MG42 at their disposal, and four passengers who remain unarmed. Others may be transported by jumping onto the vehicle without actually embarking; however, this will cause physics glitches and may throw outside passengers overboard.

A beached Daihatsu in Battlefield 1942 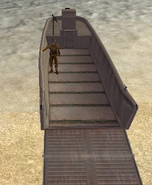 A player stands in a passenger position of a beached Daihatsu

In Battlefield Vietnam's WWII mod, the Daihatsu is the Imperial Japanese Army's landing craft. It appears at the same locations as in Battlefield 1942, and performs identically, except that the two front passengers in the barge can use their infantry weapons. It is the IJA equivalent to the USMC LCVP.