Agent Darius Barnes is a minor character featured in Battlefield Hardline. His ultimate fate is discovered by Nick Mendoza during his "Boomer Connection" investigation.

Agent Darius Barnes was sent by Julian Dawes and Carl Stoddard to investigate Marcus Boone who was known to be an associate of Nick Mendoza. Upon finding Boomer, the intention was to be led to Nick where Agent Barnes could then arrest him and bring him back to Dawes.

Holding Boomer's dossier in his possession, Barnes started his investigation at Tony Alpert's compound where Boomer had lived for a few years after going AWOL from the Army. Aware of Alpert's stance on the government, he parked his government vehicle away from the compound in order to avoid suspicion. Despite that, Barnes' cover was quickly blown and he was captured by Alpert who feared Barnes would spread the word about his intention to start a civil war with the federal government. As a result, Barnes was brutally tortured and subsequently burned alive inside an abandoned house before being buried in a shallow grave soon afterward. After discovering this, Nick Mendoza payed his respects and stated that he would call the FBI tip line and inform them of the events that lead to Agent Barnes' death. 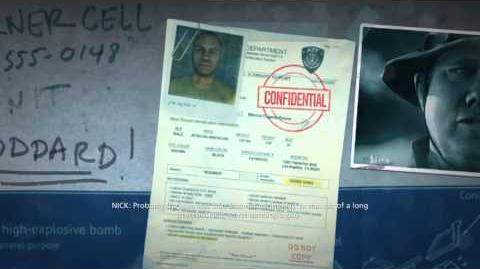 Barnes' final resting place
Add a photo to this gallery

Retrieved from "https://battlefield.fandom.com/wiki/Darius_Barnes?oldid=348480"
Community content is available under CC-BY-SA unless otherwise noted.