Dawn of Dogfights is a Codex Entry featured in Battlefield 1. It is unlocked upon completing the singleplayer mission Friends in High Places.

THE BIRTH OF AIR COMBATEdit 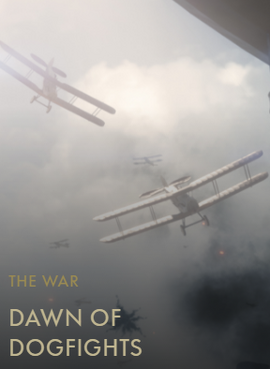 As the war broke out in 1914, each country had only a few aircraft available and they were primarily used for reconnaissance. Soon, the war for supremacy in the skies found the pilots shooting at each other with revolver, steel darts, and small rifles. The arms race in the sky soon replaced the small arms with a machine gunner, and small bombs attached to the sides of the planes.

The era of dogfights and flying aces came with the invention of interrupter/synchronization gear by Dutchman Anthony Fokker. This allowed machine guns to fire through the propeller so a pilot could aim his gun by pointing his aircraft directly at this target.

Retrieved from "https://battlefield.fandom.com/wiki/Dawn_of_Dogfights_(Codex_Entry)?oldid=343428"
Community content is available under CC-BY-SA unless otherwise noted.