Dawnbreaker (Traditional Chinese: 破曉行動, Simplified Chinese: 破晓行动) is a map featured in Battlefield 4. It is set near the Victoria Harbour area of Hong Kong.

Set in Hong Kong at dawn, this map focuses on infantry combat, but multiple vehicles are present as well. Its main Levolution event involves overriding the gas pipes on either end of the main street, resulting in an explosion. This causes the underground pathway where the pipeline once stood to open up, and also destroys the bridge Flag C sits upon, preventing vehicle movement. Also, at some point towards the end of the round the sun will rise bathing parts of the map in light.

There are five flags in Conquest total, and there are no differing sizes for Conquest on Dawnbreaker. Conquest features only one Battle pickup, the HVM-II, between the Bus Station and the Government building.

A flag features a long rectangular building, with several buses parked outside. One part of the interior features shelves, with a desk at one end of the room. Outside, a triangular area of grass and trees provides cover, along with the buses. There is a road around the back of the Bus Station that offers a flanking opportunity at any enemies inside. Two Quad Bikes spawn here.

B flag is in a square, with a stone Guardian Lion statue. A ledge from a building above provides good overwatch, and concrete barricades surround the edge of the square, however the barricades can be destroyed with small arms fire. The Levolution on this map can be accessed on the main street to the northeast of the Government Building. A small road to the north of the flag provides a good flanking route. A wooden guard tower can be found nearby, overlooking an area to the northeast. Two Quad Bikes spawn here.

C flag is on top of an overpass overlooking the main road in the map. The middle of the bridge offers little cover, with the railings being the only "cover" available. At the ends of the bridge, concrete walls and h-barriers offer rudimentary cover. The bridges offers a slight vantage point over the rest of the surrounding area. After the Levolution event, the center of the bridge collapses, preventing vehicles from proceeded down the main road. However, vehicles can simply drive around it. A Quad Bike Spawns here.

E flag is in the middle of parking spaces, next to an Embassy, a building similar in layout to the Research center seen on Lancang Dam. It has a small overpass connecting it to a smaller building over the parking spaces. Both Embassy buildings feature two floors, the top floor being an office with desks and computers, and the lower floor functioning as a lobby with metal detectors, a reception desk, an auxiliary office, and toilets. Two Quad Bikes spawn here.

There are four bases in Rush with the USMC leading an offense against the PLA.

The assault begins as both M-COMs are inside the bus station with one being close to the out-of-bounds zone (defender point of view) and the second M-COM is further up.

The attackers are given several Quad Bikes and one LAV-25. No vehicles are given to the defenders.

The next M-COMs in this area are located inside the government building and under the bridge near the intersection. Upon blowing up the M-COM under the bridge, the explosion will trigger the Levolution on this map.

The attackers are given one extra IFV, but have only access to only one Quad Bike. The defenders receive their IFV in this area.

The M-COMs in this area are located inside the parking garage and in a trench a few yards away from the embassy. If the attackers blow up this M-COM they can continue walking up the stairs toward the M-COM in the parking garage located behind some generators.

One AH-1Z Viper is given to the attackers, but equipment on both sides are still the same.

The last two M-COMs are located inside the Embassy. One M-COM is located in the white building on the second floor, while the other is in the black building behind a desk inside the lobby.

The only vehicles given in this area is a J-20 stealth jet accessible to the defenders.

Team Deathmatch is confined to in and around the government building. The USMC typically spawn near the bridge while the PLA will spawn around the lion statue on the other end of the building.

Squad Deathmatch is limited to the main urban area in center of the map. Several Battle Pickups are available for use to both the USMC and PLA.

Obliteration is limited to the eastern side of the map. Attack helicopters, jets, IFVs, and quad bikes are available.

The Meeting Room Flag is located in the office to the south. It is in a blue circular print room with a large bardesk in the corner.

The Plaza Flag is located near the west street. It is surrounded by concrete walls, green and white crates, and concrete cubes.

The Statue Flag is located on the large lion statue near the northeast street. It is surrounded by concrete walls on all sides.

MCOM A is located where the Plaza Flag, B is in Domination, outside the buildings to the west. It is wedged between green crates, white crates and concrete walls and cubes. MCOM B is located inside the brown room in the smaller building to the northeast; it is accessible from the outside from the glass walkway and windows, as well as the two doorways leading in from the inside. 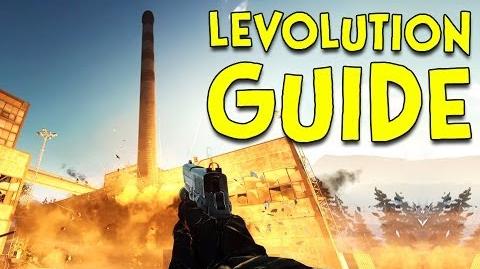 ALL LEVOLUTION GUIDE! - Battlefield 4 Launch-0
Video detailing the Levolution events in the multiplayer maps, including Dawnbreaker

An explodable pipe that is part of the Levolution

The collapsed bridge that is part of the Levolution

A shot of the sun rising on Dawnbreaker

An overview of Dawnbreaker