Decoys in WWI is a Codex Entry featured in Battlefield 1. It is unlocked upon the destruction of the player's Sniper Decoy when playing as a Scout. 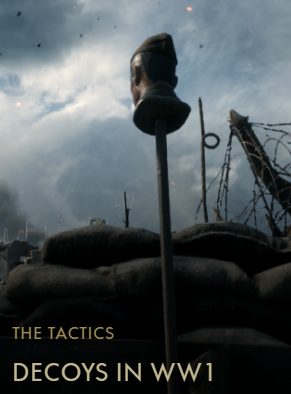 A tree made of steel in no man's land provides an excellent sniper position. A fake dead cow creates a perfect hideout for observing the enemy. A dummy head to draw sniper fire. A helmet on the ground hides an underground lookout. This ingenuity emerged from the need to be concealed along the front.

Perhaps the most spectacular story is one where the French built an entire "second Paris" towards the end of the war to fool German bombers. It was situated in the northern outskirts of Paris and featured fake streets with electric lights complete with a copy of the Champs-Elysees, the Opera, the Arc de Triomphe, and the train station Gare Du Nord. Building were completed with a high level of detail. This is a story that very few Parisians know of. The fake Paris was rapidly demolished after the war ended in 1918.

Retrieved from "https://battlefield.fandom.com/wiki/Decoys_in_WWI_(Codex_Entry)?oldid=343346"
Community content is available under CC-BY-SA unless otherwise noted.