The Automated External Defibrillator (AED) is a portable electronic device that automatically diagnoses the potentially life-threatening cardiac arrhythmias of ventricular fibrillation and ventricular tachycardia in a patient, and is able to treat them through defibrillation, the application of electrical therapy which stops the arrhythmia, allowing the heart to re-establish an effective rhythm to prevent the host from dying. The defibrillator is used in cases of life-threatening cardiac arrhythmias which lead to cardiac arrest.

In the Battlefield series, Defibrillators appear as gadgets in multiple installments and are used for instantly reviving killed teammates, and are capable of killing enemies in all of its appearances. Their manner of usage, (cooldown time, usable distance, types of deaths that a player can be revived from), differ in each installment. Based on the theme of the game, the Defibrillator may be replaced with the Syringe or the Autoinjector.

Semi-automatic (delay of 0.4 seconds per use)

1000
"The Defibrillator is standard equipment in all modern armies. They are used to save mortally wounded soldiers. There are rumors that medics have used the defibrillator as weapons in close action combat."

Shock Paddles is a gadget featured in Battlefield 2 for the Medic Kit. It can revive any critically wounded ally to full health. A heartbeat icon is used to represent downed allies. The defibrillator can also be used on enemy players, instantly killing them, much like knives but with a slightly longer range and slower rate of attack.

The defibrillator functions like a bullet weapon: the crosshairs must be on a target in range. It does not matter what part of the body is targeted, so long as it belongs to a critically wounded ally or living enemy. Because a player's body parts may sometimes clip through walls, targeting them can allow the player to revive or kill them. In some cases a player, whose body is clipped or too far away from the kit of the soldier, cannot be revived. In most cases this can be solved by throwing a Medkit directly on the body, which resets the corpse to its original position or pushes it out of the wall.

In-game, the Shock Paddles can be used on critically wounded allies. A revived player regains control of their character in prone position.

The Shock Paddles may also be used to kill healthy enemy soldiers. It should be noted that patches have made killing enemies with the defibrillator only happen if a "sweet spot" is hit which lies somewhere near the enemy's head area.

Once 15 seconds have elapsed for a fallen player, they are considered "killed" and cannot be revived. Players that have been instantly killed (skipping the critically wounded stage), committed suicide (via the pause menu), or disconnected from the server also cannot be revived.

The Shock Paddle has longer range than the knife, enough so a user standing up can revive a fallen ally at his feet. This may allow players to do a "drive-by revive" that keeps the user in motion.

It is considered very poor form for a player to revive someone without making sure their killer is not still watching. Players may also object to being revived if they intended to switch kits or have used up their ammo. On servers where friendly fire is on, some medics may opt to kill and revive an ally rather than use a medkit.

The Defibrillator is a gadget featured in Battlefield 2142 as the first tier 2 Assault unlock. The weapon model is a single-handed device with three projecting pads. Unlike Battlefield 2, the AED-6 can be used up to three times before overheating, and it can kill enemies up close.

It has slightly longer range when used for revives than as a weapon—a standing player can revive an ally at his feet, but cannot kill a prone enemy without first crouching himself.

The Defibrillator in position to revive the fallen teammate in Battlefield 2142.

"The AED is capable of resuscitating victims in a state of cardiac arrest. Administration must be done within seconds of arrest. It is inadvisable to use it on a healthy individual or as a form of 'entertainment'."

— In-game description of the Defibrillator

The AED is a gadget featured in Battlefield: Bad Company 2 for the Medic kit.

There is a 3-second cooldown for the AED before it can be used again. It is sometimes used to "corpse camp" by continuously reviving a friendly player to keep a turret by enemies, similar to how Engineers can keep a vehicle running despite it being pummeled by rockets.

While the "hit box" for reviving a downed player with the defibrillator is quite large, players should still have an allied corpse filling the majority of the screen in order for the gadget to work.

While playing as a medic equipped with a defibrillator, recently killed squad members will have a green heartbeat sign on the mini map but non-squad team members recently killed will appear with a white variant, as long as the player is not playing hardcore mode. The line resembles the spike created by a single heartbeat on an electrocardiogram (ECG/EKG). A similar line will also appear over the corpse in first person view, and will gradually dim as the downed soldier nears respawn.

"This unit uses a high voltage shock to revive critically wounded teammates. This electric discharge from the Defib can also be used to kill enemies in close quarters situations."

The Combat Defibrillator is a gadget featured in Battlefield Play4Free for the Medic kit. It can be obtained spending at least one point in the Tier 2 training option Defibrillator.

Revived teammates will only have 50 points of health and need to be healed with a Medkit; spending more points in the Defibrillator training option increases the amount of health received, first to 80% and then to full health. Similar to other titles, the player will be rewarded points for each time he/she revives a teammate. The Defibrillator may also be used as a weapon; shocking an enemy will always result in an instant kill.

A render of the Defibrillator in Play4Free

A "Center-line view" of the Defibrillator in Play4Free

A "Back side view" of the Defibrillator in Play4Free

A pair Defibrillators as they appear in-game

The Defibrillator is a gadget featured in Battlefield 3 for the Assault kit.

Use as a Revive Tool[]

Friendly medics will see an EKG icon above players that are in a certain radius of them and can be revived, both in first-person view and in the minimap. This replaces the skull-and-crossbones icon seen by other classes.

Fallen players now have the option to accept or reject being revived. A defibrillated soldier gains use of their sidearm, recovers some health, and can crawl around. If the player is killed again, or neglects to accept the revive within ten seconds, they are permanently lost. Players can refuse revival—especially if unwanted or abused—by holding the Enter/Exit Vehicle key.

Upon pressing the Jump or Crouch button, the revived player regains full health and can again access their entire inventory. Should the player be wounded again at this point, they can again be revived.

Use as a Weapon[]

The defibrillator is capable of killing enemy infantry only at very close range.[1] It has a very precise crosshair that must be pointed at the target in order to hit. Primary Fire must also be held down throughout the sequence in order for the shot to actually register.[2] The defibrillator must be aimed around the front or back of the sternum of an enemy to get a kill.

Attacking with the defibrillator causes the target to flinch before the paddles are actually planted (and the "shot" is fired), therefore it is advised to hold down the firing button for 1–2 seconds.[3] Also, the firing animation can be triggered up to five meters away. Along with network latency, these factors can make defibrillator kills very difficult, but not impossible.

The player used to mutter murderous taunts when using the defibrillator to revive teammates. This has been patched so they are only spoken when killing enemies. 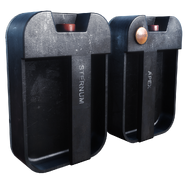 A pair of defibrillators being held.

The Defibrillator is a gadget featured in Battlefield 4 for the Assault kit. Its performance now resembles the version seen in Battlefield 2142, allowing up to three successive uses (charges will automatically be "reloaded" passively). A new feature of the defibrillator is the ability to pre-charge the paddles, which will increase the amount of health the revived player receives. When immediately reviving without charging, the revived player will only have 20% health. However, with Combat Medic specialization, the DEFIB UPGRADE improves an Assault soldier's use of the defibrillator by increasing its charge rate and recharge rate by 100%. It also increases the minimum health received from 20% to 34%.

The revive icons have different colors for squadmates and other team members. (Spectators see icons for all players.) A player can be revived as long as they are inside the killcam, which lasts for 10 seconds after their death. Since the Fall 2014 patch, there is a timer which shows how much time a player has to revive his teammate. Also, there is now a beeping sound when the defibrillator is fully charged.

Revived players are given a choice to immediately accept or reject the revive:

During this stage, the player is considered to be alive and can be killed again.

The defibrillator retains its ability to kill enemy infantry, also in tank, IFV (use on secondary gunner on top only) and in bomber control point (use on stair). As in Battlefield 3, it will kill an enemy soldier with one hit, although the fire button does not have to be held down to reliably kill an enemy. A very quick charge (for example just tapping the fire button) sometimes is not enough to be lethal, but you do not need to charge them as long as you would in order to revive a teammate with 100% health. Defibrillator kills are required for Open Fire and Ultimate Assault assignments.

• Revival of teammates
• Can be used as a makeshift weapon

20% - 100%
34% - 100% (Revive Upgrade)
"The AED (Automated External Defibrillator) is a portable electronic device that can bring downed teammates back into the fight. Spending time preparing the AED brings teammates back with increased health. Fully charged, it can also take down an enemy."

The Defibrillator is a gadget featured in Battlefield Hardline, issued to the Law Enforcement Operator kit. It can also be found as a Battle Pickup mounted on walls in an AED kit.

It functions in the same manner as the Revive, allowing players to revive one another. Purchasing the Defibrillator will also unlock the "Revive" auto-injector, or vice versa. An advantage of the defibrillator over the Revive is an audible tone when fully charged.

Like reviving in Battlefield 4, it revives with a minimum of 20% health, and charging for a few seconds will increase its effectiveness. The Revive Upgrade will make the charging faster, and increase the minimum health received. The amount of charges is not limited, and it only has a very short delay between uses.

Unlike in all previous games, if a player dies after being revived, he cannot be revived again within three minutes of his last revive. (This also means that players cannot be revived more than once per round of Rescue or Crosshair.) Additionally, victims of Knife Takedowns, Non-Lethal Takedowns, explosives, or roadkills cannot be revived by a teammate, making reviving more limited, but still useful.

• Emergency resuscitation of wounded infantry
• Instant kill at very close range
The Defibrillator is a gadget featured in Battlefield 2042. Only available in the Battlefield Portal, it functions in the exact same manner as it's counterpart in Battlefield 3.