Defuse, also referred to as Elimination during internal development, is a gamemode featured in Battlefield 4, available for all maps present in the game.

The gamemode pits two squads of five players as either attackers or defenders against one another in close quarter situations in a series of six rounds with the winner being the team with the most wins. After three rounds, the teams switch their objectives, and the map's weather and destruction factors are reset.

Once killed, players cannot respawn until next round, and each player can only be revived once per round. Killed teammates may spectate the match until the round ends. If all players on the attacking team are dead, but the bomb is still planted, the match will continue until the bomb is either defused or explodes. Also, the bomb will go off regardless if someone is defusing or not, unlike the M-COM stations in the Rush game mode.

A round ends when: 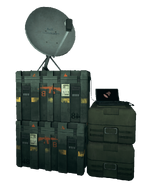 An M-COM objective.
Add a photo to this gallery

Retrieved from "https://battlefield.fandom.com/wiki/Defuse?oldid=359334"
Community content is available under CC-BY-SA unless otherwise noted.