"When the French army liberated Paris, they pulled back all the black troops. They replaced them with more...familiar faces. But I know what we did. And at what cost. And I'm proud of it."

— An elderly Deme reflecting on the war.

Deme Cisse is the protagonist and main character of the Battlefield V singleplayer war story Tirailleur. As a young man, he was a member of the Senegalese colonial contingent of the Free French Army, fighting to liberate the so-called homeland in the southern France campaign of August-September 1944. However, the story is told in flashbacks, recounted without lustre by Deme as an old man.[1]

In his youth, Deme was an intrepid soldier bound by idealism and his strong friendship with Idrissa. He came to fight in an effort to win glory and respect for himself and his fellow countrymen, which is his primary motivating factor throughout the story. This illusion is soon shaken by his unfair treatment by white soldiers, which he vocally objects to. He is also spurred on by the German's attitude that as blacks they are inferior, and is compelled to prevent them from winning. The eventual fate of the Tirailleurs impacts heavily on Deme because of his belief that respect can be won through sacrifice.

Initially inexperienced, Deme is shocked by the sights of battle but is comforted by veteran Idrissa, with whom he jokes and receives vital guidance from, such as when he is stopped from shooting a fleeing German soldier. Throughout the campaign, he is reassured by a strong sense of individuality, without which he professes the scale of the war would crush him "like an ant". After some victories, Deme becomes increasingly confident, willingly taking on seemingly insurmountable odds, while beginning to ignore Idrissa's protests. His infectious enthusiasm inspires the rest of the unit to press on and later appoint him leader, eventually even winning over the more cautious Idrissa. His cocky pursuit of glory reveals a callous streak - when the assault leads to increasing casualties, he dismisses them as acceptable losses and urges Idrissa, who just wants to reunite with his wife and children, to continue to follow him lest their comrade's deaths be in vain.

The events of the war, particularly his final actions shown in the story and its aftermath, have had a profound effect on Deme's personality. He is very bitter at his unit's lack of recognition, especially the active removal of black troops from the records. It causes him to reexamine much of his earlier motivations and war experiences. For example, after initially being guilty he could not thank a Spitfire pilot who supported the unit with an airstrike, he voices disdain having lived to learn the pilot's comparative wealth of public appreciation. Regardless, he is evidently very proud of the Tirailleur and his friend Idrissa, being brought to tears when discussing their plight.

Deme arrives in France, the homeland he has never seen before, during Operation Dragoon in 1944. Along with his close friend Idrissa and his company of Senegalese Tirailleurs, he considers himself a true Frenchman and expects to win glory on the field of battle, but instead has his weapon taken and is immediately set to menial work filling sandbags while white French troops march into battle. He expresses disapproval at his treatment, but as the front stalls and casualties mount, he has his wish granted and is sent to the frontlines - a forested area in Provence that has been heavily fortified by elite Fallschirmjäger troops - in an effort to take out a major anti-aircraft battery behind the lines.

Despite being bombed by Stukas and fighting through formidable defensive lines of concrete pillboxes and dragon's teeth, Deme's company successfully clears Stongpoint Kilo, destroys the field guns at Schanze 66 and secures Stützpunkt Geist against counterattack. His initial disbelief is transformed into optimism, and rallies the company to continue the assault.

As the advance towards the AA battery continues, Deme is put onto runner duty to locate a separated Tirailleur section - callsign Jules. He finds the unit had been ambushed and its surviving surrendering personnel executed on the spot by the Germans, who remark euphemistically that their commander "doesn't want to see any Tirailleur prisoners". Deme blames himself for not being quick enough, before pressing on through enemy checkpoints and a C-47 crash site to rejoin the main force.

The assault on the Flak 88 battery is successful but results in massive casualties, upsetting Idrissa who had earlier pleaded with him not to push on without support. Deme's pride in victory is mocked by a wounded German soldier, who proclaims that with their depleted numbers, the Tirailleurs will be destroyed by their coming counterattack, taunting them that "no-one will ever know [they] were here". Instead of retreating or holding fast, Deme instructs the unit to advance into the woods and seize the enemy headquarters in the Château Vieux by attacking from behind. The plan is considered crazy by Idrissa, but he is reassured by Deme who subsequently is appointed leader of the company's survivors.

Taking point in the assault, Deme clears out several fortified villages on the way uphill towards the castle. The door is blasted in with a PaK gun, and as Deme confesses that a part of him wishes they had never made it through, the Tiralleurs storm the fortress. The Germans are prepared and the Tirailleurs are cut down in droves, with Deme himself being wounded by a shell. As a Tiger I marauds through the shattered ranks, Idrissa drags Deme to safety. The pair are cornered, and Idrissa sacrifices himself by climbing onto the tank and blowing it up with a Mills bomb. The mortally wounded Idrissa dies in Deme's arms, before the latter picks up his rifle and continues on into the château with two other survivors.

The men break into the main hall, but find only an unstaffed field hospital. Deme finds satisfaction in the victory, proclaiming to Idrissa's memory that "we are kings", and is congratulated by an arriving unit of white French soldiers and the Tirailleur's Captain. The three exhausted survivors are gathered on the steps of the château with the newly arrived troops for a photograph.

Despite his desire for fame and glory, Deme and all other black troops were withdrawn from frontline duty after Paris is liberated. Over time he becomes aware that his unit's bravery and personal struggles will be largely forgotten in the greater history of World War II, finding the photo taken at the château has the Tirailleurs airbrushed out. In old age, Deme seeks to set the record straight by recounting his story on film. 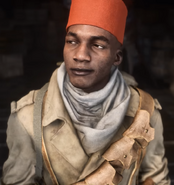 Deme on his arrival to France

An elderly Deme recounting his story

A picture taken following the capture of the château by the French Army. Deme and other Tirailleur were doctored out of the photo so as to hide their role in history.