The Grenade, Hand, Anti-Tank, No. 75, known commonly as the Hawkins Grenade, was a British anti-tank grenade used during World War II. It was one of several cost effective designs to make up for the lack of anti-tank guns in the aftermath of the Dunkirk evacuation, alongside the No. 74 Sticky Bomb. Entering service in 1942, the grenade was also used by the United States Army.

1
"The No.75 Hawkins grenade works as a low power anti-tank mine, and can be thrown a longer distance than a traditional heavy anti-tank mine."

The Demolition Grenade is a gadget set to be featured in Battlefield V. Added in the Summer Update, the grenade is available to all kits. The gadget functions as a low power anti-tank mine with a greater throwable range than the Anti Tank Mine or Sticky Grenade. The grenade will not explode until it comes into close proximity with a vehicle, or it is detonated by gunfire. Before it explodes, both users and enemy players can pick up the grenade like an Anti-Tank Mine to defuse it. 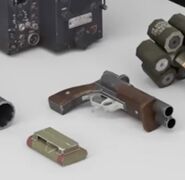 Retrieved from "https://battlefield.fandom.com/wiki/Demolition_Grenade?oldid=376892"
Community content is available under CC-BY-SA unless otherwise noted.