Desert Cars is a Codex Entry featured in Battlefield 1. It is unlocked by destroying all three vehicles undetected in the chapter Hear the Desert in the singleplayer mission Nothing Is Written.

To remain undetected, players need to destroy all vehicles simultaneously. This is accomplished by picking up Dynamite in the weapon tent and carefully avoiding enemy patrols. Once obtained, players must carefully approach each vehicle and set a stick of dynamite on them. Once all three sticks are placed, the player may detonate them and unlock the codex.

ARMORED CARS IN THE DESERTEdit 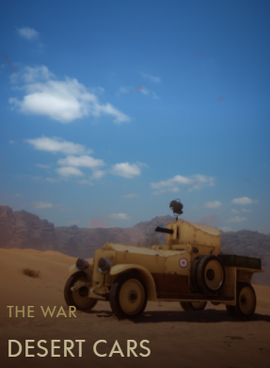 The biggest admirer of the newly established British "Light Armored Motor Batteries" was probably T. E. Lawrence during the Arab Revolt. He would use the high mobility and speed of his nine armored Rolls-Royces to carry out fearsome hit-and-run attacks against Ottoman garrisons and outposts.

Although outfitted with thinner armor than tanks, their ability to quickly advance over desert ground under enemy rifle fire made them highly effective assault vehicles. Attacking with a water-cooled .303-inch machine gun mounted inside a revolving turret, their main task was to tie down the defenders as infantry and cavalry advanced in their wake.

Retrieved from "https://battlefield.fandom.com/wiki/Desert_Cars_(Codex_Entry)?oldid=343401"
Community content is available under CC-BY-SA unless otherwise noted.