Somewhere off the coast of Lebanon

Devil's Perch is a map featured in the Battlefield 2 expansion pack, Special Forces. It features a United States Navy SEALs assault on a Middle Eastern Coalition intelligence base.

"Located off the coast of Lebanon, the Devil's Perch was once a sanitarium but has since been abandoned. MEC Special Forces have moved in and are using it as an intelligence base to gather information on nearby European countries. Having made this discovery, the U.S. is sending in the Navy SEALs under the cover of night to clear out the MEC threat. The battle will be swift and fierce, but the team that can perform expertly on rugged terrain and use the dark to their advantage will be victorious."

Devil's Perch is comprised of one main island in the west, and a small chain of smaller islands to the east. In the sixteen-player variant, only the main island is playable: a fairly linear progression winding up from the SEALs start to the Asylum. In thirty-two player mode, the MECSF retains control of most of the islands at start except for a base in the far east. In sixty-four player mode, the map is largely the same as in thirty-two player variant, except that the easternmost base is capturable and instead, the SEALs begin with a sub as an uncapturable base. In all versions, the gametype is conquest assault.

The sixteen-player variant of Devil's Perch has two variations: the singleplayer and multiplayer variants. In singleplayer, the flags are more concentrated, lining the pathway leading up to the Asylum. There are no boats in this mode, and as a result the game is very linear, ending at the Church flag. However, in multiplayer, there are several boats (essentially turning the map into a circuit, because there is a large stairwell on the opposite side of the Asylum), and the flags are more spread out. 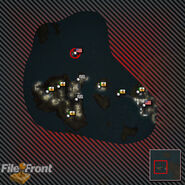 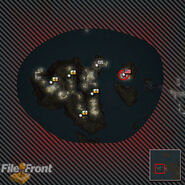 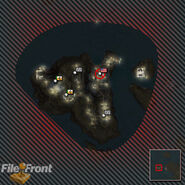 16-player singleplayer variant
Add a photo to this gallery

Retrieved from "https://battlefield.fandom.com/wiki/Devil%27s_Perch?oldid=326027"
Community content is available under CC-BY-SA unless otherwise noted.