Dicta Boelcke is a Codex Entry featured in Battlefield 1. It is unlocked by not losing the trail of the friendly fighter during the chase in the chapter Test Flight of the singleplayer mission Friends In High Places.

The trail refers to the meter that fills up around the circle found in the center of the screen. This is done by staying within a certain distance of the friendly fighter. If the trail is lost the meter will not reset but the codex will become unable to be unlocked. Due to a bug it is advised not to reload the checkpoint if the attempt failed but instead the entire chapter as the codex will not track properly otherwise. 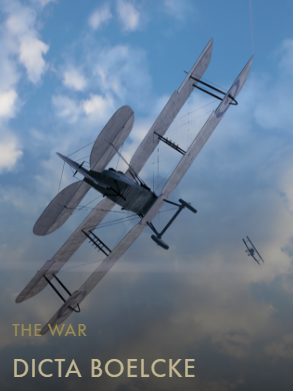 The pilots of the German Hunting Squadrons, also known as the Jastas, were trained to follow the guidelines set be Oswals Boelke in his "Dicta Boelke". It contained a series of aerial combat techniques that covered both attack procedures and tactics.

EXCERPT FROM THE DICTA BOELKE:Edit

1. Always try to secure an advantageous position before attacking. Climb before and during the approach in order to surprise the enemy from above, and dive on him swiftly from the rear when the moment to attack is at hand.

2. Try to place yourself between the sun and the enemy. This puts the glare of the sun in the enemy's eyes and makes it difficult to see you and impossible for him to shoot with any accuracy.

3. Do not fire the machine guns until the enemy is within range and you have him squarely within your sights.

4. Attack when the enemy least expects it or when he is preoccupied with other duties such as observation, photography or bombing.

5. Never turn your back and try to run away from an enemy fighter. If you are surprised by an attack on your tail, turn and face the enemy with your guns.

6. Keep your eye on the enemy and do not let him decieve you with tricks. If you opponent appears damaged, follow him down until he crashes to be sure he is not faking.

7. Foolish acts of bravery only bring death. The Jasta must fight as a unit with close teamwork between all pilots. The signal of its leaders must be obeyed.

Retrieved from "https://battlefield.fandom.com/wiki/Dicta_Boelcke_(Codex_Entry)?oldid=343390"
Community content is available under CC-BY-SA unless otherwise noted.