The M1030M1 is a dirt bike used by the United States Marine Corps, and is built around a modified Kawasaki KLR650. Unlike standard commercial dirtbikes, the M1030M1 runs on JP-8, a jet fuel used widely by the US military similar to diesel, to help ease logistics. The bike has a top speed of approximately 90 miles per hour, and consumes fuel at the rate of 96 miles per gallon at 55 miles per hour. The M1030M1 is used for scouting missions, messenger services, convoy control, and military police work.

Personal weapons
"The dirtbike is a fast and agile two-seater motorcycle."

The Dirt Bike is a vehicle featured in Battlefield 3: End Game. Similar to the Quad Bike from the Armored Kill expansion, the Dirt Bike is a high-speed light vehicle that allows both a driver and a passenger, who sits behind the driver on the rear of the bike. The vehicle has no armament apart from the passenger, who has access to their infantry weapons. Unlike the quad bike, which only allows rear-directional fire, the passenger on the Dirt Bike has a nearly 360° view (except for the area directly behind the bike).

The driver can utilize Boost, further increasing the speed of the vehicle. While doing so, the driver will pull a wheelie, which can affect the passenger's aim. The leaning required for tight turns can also disrupt aim.

The maps in End Game are specifically designed for travel by motorbike. There are several ramps around the maps, allowing riders to do jumps and stunts from them. Depending on the map, jumps may either be from artificial objects, or from natural terrain features.

While the driver and passenger are completely exposed to gunfire, the compact nature of the Dirt Bike makes it harder for enemies to destroy it using Anti-Tank Mines or Rocket Launchers. However, as with other light vehicles such as the Quad Bike, the Dirt Bike is extremely vulnerable to guided weapons; the vehicle has no lock-on warning system and can be destroyed with a single missile. Furthermore, unlike other light vehicles, dirt bikes can be damaged and destroyed with small arms fire.

As shown in the cover

A Wheelie
Add a photo to this gallery 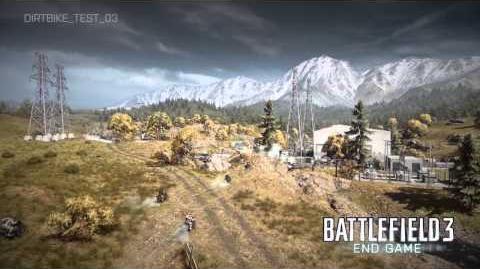 End Game Dirtbike Test 720
Video showing the new ramps to be developed for the Bikes.
Add a photo to this gallery

The Dirt Bike is a vehicle featured in the Battlefield 4: China Rising and Dragon's Teeth expansion . It performs similarly to that seen in Battlefield 3, capable of higher speeds than the Quad Bike and seating two players, a driver and a passenger. The passenger has a nearly 360° rotational view and can use their personal weapons and equipment, allowing Engineers to use their Repair Tool or rocket launchers, while Support and Recon players can perform drive-by C4 attacks from the passenger seat. The Dirt Bike can also survive significantly longer drops than the Quad Bike, and players can perform jumps using terrain on the map to cover more ground.

As in Battlefield 3, Boosting causes the vehicle to speed up further and the driver will pull a wheelie. This will affect the passenger's aim, making it impossible to shoot ahead of the vehicle accurately and slightly more difficult while aiming behind the vehicle. The leaning required for tight turns can also disrupt aim.

The Dirt Bike cannot use its motor to move backwards, the player's soldier instead must use their feet when moving in reverse, moving significantly slower than any other vehicle.

As the Dirt Bike has a much smaller frame, it is a harder target to hit with dumb-fire AT launchers like the RPG-7V2 and can fit between gaps in Anti-Tank Mine fields. However, the passengers are completely exposed to gunfire, although it's high speed still makes them a difficult target unless the vehicle is heading directly towards the attacking player. It is also extremely vulnerable to lock-on and guided weapons, like the FGM-148 Javelin and SRAW, which will either follow the vehicle or can be guided to intercept it while it travels. M2 SLAMs can also be problematic as they can be stuck to walls on sharp turns, making them more difficult to avoid at high speeds compared to AT Mines. Unlike Battlefield 3, the Dirt Bike does have a lock-on warning, providing the occupants with a chance to escape the vehicle if they are locked onto.

A pair of PLA Assaults driving a Dirt Bike on Silk Road.
Add a photo to this gallery

The Dirt Bike and Offroad Patrol Bike are vehicles featured in Battlefield Hardline. They are off-road motorcycles used by the Criminals and Law Enforcement respectively, replacing the normal Street Bike and Police Motorcycle on rural maps like Dust Bowl and Everglades.

The bikes are highly maneuverable and can seat two players, one driver and one passenger. They function similarly to the Dirt Bike of Battlefield 3 and Battlefield 4. The passenger has a nearly 360° view and can use their personal equipment to defend or attack, like the Mechanic's grenade launchers or the Enforcer's Breaching Charge. Boosting will cause the bike to move faster and the driver will perform a wheelie, somewhat impeding the passenger's ability to aim to the front.

Both bikes are very lightly armored and both players are highly exposed to gunfire, though the high speed of both bikes makes them difficult to hit with explosives. The two bikes only differ slightly in appearance, and by their horns; like other Law Enforcement vehicles, the Patrol Bike's horn is replaced with its lights and sirens.

Players can receive a "Jump Bonus" by performing high-speed and high altitude jumps off of map terrain on the bikes. The bonus awards more points for higher jumps than shorter ones, but the maximum bonus that can be received is 50 points.

The Offroad Patrol Bike
Add a photo to this gallery

Retrieved from "https://battlefield.fandom.com/wiki/Dirt_Bike?oldid=358072"
Community content is available under CC-BY-SA unless otherwise noted.