Battlefield Wiki
Register
Don't have an account?
Sign In
Advertisement
in: Standard, Mechanics, Features of Battlefield Hardline,
and 2 more

Not to be confused with the multiplayer map, Diversion

Distraction is a gameplay mechanic featured in some singleplayer campaigns of the Battlefield series. 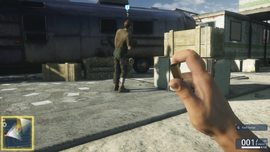 Distraction is a feature in the Battlefield Hardline singleplayer campaign. It causes Nick to throw an empty shell casing, which will attract the attention of enemy NPCs to the location that the shell lands.

Distractions only work on enemies in a neutral or search posture, luring them into a search pattern. Enemies will ignore distractions while alert (i.e. player position is known). Enemies will also ignore the flight of a distraction, only responding to the noise made on landing.

Using the Distraction is useful, and at times necessary, if the player is attempting to complete a singleplayer episode stealthily, allowing the player to alter patrol patterns and clear routes for a short time. It can also be useful for getting a criminal with a Warrant away from others in order to arrest him silently.

If a Distraction is thrown in the mission Gauntlet, Nick will throw a rock instead.

The Lure is a feature of the singleplayer campaign of Battlefield 1. Similar to Battlefield Hardline, it is a shell casing that can be thrown in stealth segments of the game to distract unaware enemies. This allows the player to either pass them unnoticed or the opportunity to perform a Takedown on them.

The Lure is a feature of the singleplayer of Battlefield V. Functioning in the same manner as Battlefield 1, it is a shell casing that is thrown in order to distract enemies. This grants the player an opportunity to either silently dispatch enemies or to sneak by them unnoticed.