Battlefield Wiki
Register
Don't have an account?
Sign In
Advertisement
in: Standard, Awards, Features of Battlefield 2142,
and 10 more

A Dog Tag or Dogtag is the informal name for the identification tags worn by military personnel, nicknamed as such because of their resemblance to actual dog tags. The tag is primarily used for the identification of dead and wounded along with providing essential basic medical information for the treatment of the latter such as blood type and history of inoculations.

Dog tags are usually fabricated from a corrosion-resistant metal or alloy such as aluminum, monel or stainless-steel, although during war-time they have been made from whatever metals were available. In the event the member has a medical condition that requires special attention, an additional red tag with the pertinent information is issued and worn with the dog tags.

Dog Tags were introduced in Battlefield 2142 to reward players who earned knife kills.

The dog tags collected do not differ in any way, except for the name of the killed player changing accordingly. An example dog tag with the name "[DICE]ThXu4βp1y" appears at the end of the game's introductory video, an enduring thank-you to beta testers.

Players could view their dog tag collection in the "BFHQ" game menu, or on various online stat servers (including EA's own).

Players who earned 50 career knife kills were also awarded the Dogtagger Dagger, a cosmetic replacement for the knife.

Dog Tags in the Bad Company series are obtained in the same manner as Battlefield 2142 but have different appearances based on the owner's rank:

Extra points are awarded in Battlefield: Bad Company for knifing an enemy depending on their in game level. For example, if an enemy is level 10 when knifed, 10 extra points will be awarded to their killer.

Players can view all the dog tags they have earned at the "Stats" section of the main menu of either Bad Company game. There the player can view the Xbox Live Gamertag, EA Account ID or PlayStation Network username of every person killed using the knife.

A player being awarded a gold dog tag in Battlefield: Bad Company.

Dog tags in Battlefield 3 are divided into two sets - standard tags, such as rank icons, weapon tags and other easily acquirable tags are in this class. This class represents the left tag, and is on the same tag as the player's name and clan tag. "Special" tags, such as those for previous Battlefield games, and more high-profile tags, are represented on the second, right-hand tag.

Players can customize the appearance of their dog tags to personalize the tags, displaying user's IDs, ranks, images, etc., to distinguish themselves when killed. This is done through using the Dog tag editor on Battlelog or the Dog tag menu on consoles. Special designs of dog tags are awarded for multiple things, such as ranking up, acquiring weapon service stars and acquiring ribbons.

Dog Tags are obtained by performing knife takedowns on enemies, which is reflected in the kill animations which depict a victim's tags being ripped off.

Dog Tags in Battlefield 4 function similarly to that of Battlefield 3. Enemy dog tags are obtained through either knife takedowns or counter knife takedowns. The game features more than 600 dog tags which can be obtained in various ways such as completing Assignments, weapon or gametype mastery, promotions, Battlepacks and more.

The game now displays the left dog tag on top of the right one and then swaps them around showing the right tag over the left tag before disappearing.

An example of a players Premium dog tags in the Battlefield 4 Battlelog.

How the number of times a specific dog tag has been 'taken' from another player is displayed in the Battlefield 4 Battlelog. 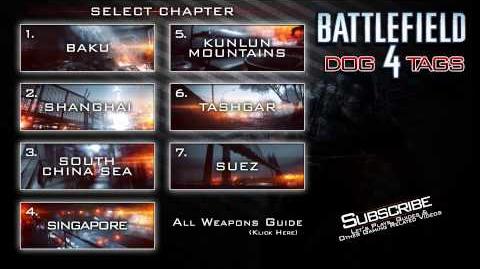 Dog Tags function in Battlefield 1 in a manner similar to Battlefield 4. They are obtained by completing specific tasks in multiplayer related player classes, weapons, vehicles, and Medals. They may also be obtained by redeeming codes, Premium membership, Battlefield Veteran status, or by participating in timed events.

Like past installments, they may be collected by performing a Takedown or with the new Bayonet Charge feature.

Dog Tags return in Battlefield V, functioning in the same manner as Battlefield 1. They are obtained by completing specific tasks in multiplayer with classes, weapons, vehicles, participation in timed events, etc. Enemy dog tags are collected by performing a Takedown, Bayonet Charge or a kill with a Katana.

Dog Tags are featured in Battlefield 2042. The appearance of them are determined by Tags for player's Player Card. Tags display a special icon on the dog tag and are obtained by completing various tasks. Dog Tags can be taken from other players by obtaining a kill with a melee weapon or performing a Takedown. The number of dog tags taken for a specific Tag are displayed by that Tag in the Player Card menu. Additionally, the rank of the player who's Dog Tag was last taken will be displayed for that specific Tag. The game currently features 40 Tags.