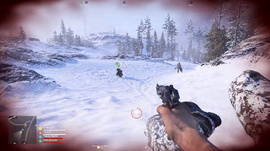 Down But Not Out (DBNO) is a gameplay mechanic featured in the Firestorm gamemode of Battlefield V.

The state occurs if the player has lost all of their 150 points of health, and they are not the last person alive in their squad when downed. Once downed, movement is slowed to a crawl. Downed players will have an additional 150 points of health. Health will slowly deplete while in the downed state. Further damage from enemy players or the firestorm will hasten this process. The revive icon will appear over a player in DBNO and can be seen by all squadmates.

Players in this state may utilize their melee weapon and attack enemies standing over them. A sidearm may also be used if the player picked one up before being downed. Despite this, the player is unable to keep the weapon steady or aim down to sights. Additionally, fire rate is slowed drastically.

Should the player not receive a Buddy Revive in the appropriate amount of time, they will be eliminated from the match. Afterwards, all items carried by the player will be dumped around their body. Remaining squadmates and players can then be viewed from a third-person perspective in Spectator Mode

Retrieved from "https://battlefield.fandom.com/wiki/Down_But_Not_Out?oldid=377813"
Community content is available under CC-BY-SA unless otherwise noted.