The Fokker Dr.I (Dreidecker, "triplane" in German) was a World War I fighter aircraft built by Fokker-Flugzeugwerke.

The Dr.I saw widespread service in the spring of 1918 gaining worldwide fame when it became the main fighter plane of Manfred von Richthofen, also known as "The Red Baron", who gained his last 19 victories, before being killed on 21 April 1918.

Compared to the Albatros and Pfalz fighters, the Dr.I offered exceptional maneuverability and rate of climb but was significantly slower than a biplane in level flight or a dive. Though the ailerons were not very effective, the rudder and elevator controls were light and powerful. Rapid turns, especially to the right, were facilitated by the triplane's marked directional instability.

Today, there are no known Fokker Dr.Is in existence, though its popularity has resulted in a large number of reproductions being created.[1]

This item has a Codex entry: DR. 1

The Dr.1 (formerly the Dr.1 Scout) is an aircraft featured in Battlefield 1. It was first seen in the reveal trailer engaging other aircraft such as a Sopwith Camel through a canyon.

The Dr.1 is the main aircraft used by the Luftstreitkräfte in Friends In High Places. German planes use red-white colour scheme with black Balkenkreuz cross symbols.

Three Fokker fighters can be seen used by the Ottoman Air Force in the Hear the Desert chapter of Nothing Is Written, escorting the Canavar. They are painted light desert khaki colour, the planes also have a large Skull painted on their sides.

In multiplayer it is the German Empire's main fighter aircraft. It is the only fighter in the game that is a triplane instead of a biplane.

Seating a single pilot, the Dr.I is armed with twin MG 08 machine guns or twin Tank und Flieger heavy machine guns. The ammunition has higher muzzle velocity and lower drag than on other vehicles, allowing for more precise aiming with little drop. It has great maneuverability and high speed, making it perfect for pursuing other aircraft. Its maneuverability also extends to stalls, allowing it to be turned more easily at low speeds or in freefall.

Certain vehicle packages provide alternative weapons such as Explosive Rockets for inflicting heavy damage on vehicles, or Explosive Darts for attacking ground troops. The Dr.I may also carry spotting flares or the ability to boost speed.

Aside from Emergency Repair on the Dogfighter build, the Fokker is not equipped with any other defensive gadgets. When pursued, it must rely on its mobility.

As of the alpha, its default paint is light green, with black/white stripes on its top wing and upper surfaces of its fuselage and tail. A special skin for the vehicle is available in the Red Baron Pack. In the beta, its default paint was yellow-brown. In the full game, they are painted dark-olive as a default colour scheme.

Dr.1 from the front

A squadron of German Fokker Dr.Is 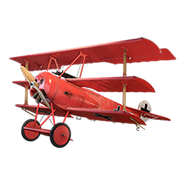 Austro-Hungarian Dr.1 seen on the right