For other versions of the map, see Dragon Valley (Disambiguation)

"Ancient legends of this “fairyland on earth,” tell of a yellow dragon that helped a king channel flood waters into the sea. Currently, American military forces are converging upon this idyllic valley, to secure a foothold in the Minshan mountain range. Elements of the US Marines are on the offensive in this sector, while the forces of the People’s Republic of China are called upon to defend ancient ancestral lands, in what promises to be a bitter engagement."

Dragon Valley is a map featured in Battlefield 2. It involves an assault by the United States Marine Corps into a valley within the Minshan Mountain Range controlled by the People's Liberation Army in Central China. The map is playable in 16-player Conquest Double Assault as well as 32 and 64-player Conquest Assault.

Dragon Valley is one of the more vehicle based maps. With the US carrier being a position for air support and the nearby harbor for ground deployment, battles on this map often end up with the American team making a long and grueling push up the valley while taking out the PLA's entrenchments. While the river and the winding dirt paths are ideal for vehicle and infantry assaults, they both move in the same direction, making direct confrontations with the enemy inevitable.

In 64 player mode, the UAV and Radar stations are located by the Docks base, while the artillery can be found on the beachhead south of the USS Essex.

In 64 player mode, the UAV and Radar stations are situated within the Chinese airfield, while the artillery can be found not too far north of the airfield.

The Refinery supports as the Chinese main base. 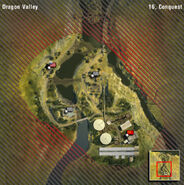 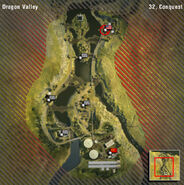 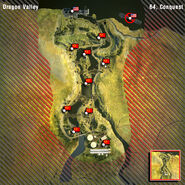 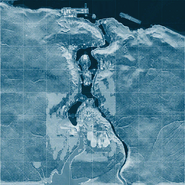 Satellite view of the map.

Retrieved from "https://battlefield.fandom.com/wiki/Dragon_Valley_(Battlefield_2)?oldid=348049"
Community content is available under CC-BY-SA unless otherwise noted.