For other versions of the map, see Dragon Valley (Disambiguation).
For the similar map featured in Battlefield 4: China Rising, see Dragon Pass

Dragon Valley 2015 (Chinese: 龙之谷2015) is a map that was released in December 2015 for Battlefield 4 with the Battlefield 4: Legacy Operations expansion. It is a reimagining of the Battlefield 2 map in the Frostbite engine, once again set within the Minshan mountain range in Central China. A portion of the map used for smaller gamemodes is also based on the Battlefield 3 map Noshahr Canals.

The map only released on PC, PlayStation 4, and Xbox One, being the first map for Battlefield 4 not available for the Xbox 360 or PlayStation 3.[1]

This original Battlefield 2 map was chosen by DICE as the featured classic map to be redesigned based on a poll voted on by the Battlefield community, although it was not actually the highest voted choice in the polls. This map was revealed and first tested on the Battlefield 4: Community Test Environment on PC June 22, 2015.[2][3]

The map was designed to have similar gameplay of the original Battlefield 2 variant. While the original featured a limited draw distance and fog which resulted in players being able to easily capture objectives and cause a relatively narrow map, the Battlefield 4 variant features more foliage as well as a cloud layer and taller terrain in order to solve this problem. But in the staging releases on the Battlefield 4: Community Test Environment, DICE removed the cloud layer because of the issue of low-end PC's not being able to handle it.  The map also holds eight Conquest flags, the most to be on one map in Battlefield 4. On par with the original version, the map has destructible/repairable bridges (repaired with the Repair Tool). But unlike the original, the US carrier that held all the aircraft for the faction has been removed. Also, the original pipeline isn't featured throughout the map but just a small portion in the Chinese base before it goes underground.

This map features most of the vanilla Battlefield 4 gamemodes including Rush, which was not a gamemode in Battlefield 2. The popular Team Deathmatch layout of Noshahr Canals is recreated for use in the adjacent port next to the U.S land spawn in Conquest, and is playable for not only TDM, but for Domination, Squad Deathmatch, and Gun Master.

The spawn for the U.S faction is located in the northwest port of the two ports located at the northernmost part of the map accessible by players. The deployment contains mostly land vehicles for engaging in vehicular and infantry battles, both attack and transport helicopters, a quad bike and PWC's for traversing the waterways in the map.

The Chinese spawn is located the front part of a small oil refinery plant which contains a subterranean pipeline which in the old versions of Dragon Valley was above ground. The deployment contains the same type of vehicles as the U.S deployment with the addition of 3 more quad bikes and the exclusion of the PWC jetski due to access to water is no available at the deployment. Unlike the U.S deployment, on a large hill overlooking the main deployment features a runway for jets and two platform helipads for holding both helicopters.

Along the main road on the left side of the map, this flag is similar to the Hill Village but this flag is easy to maneuver into with a vehicle because of the flat land it is on and the relative distance between buildings.

[Conquest Large] Flag on the highest point of the map in relation to flag altitude, and closest to the U.S deployment holds a Chinese pagota with some cover for infantry.

Commander Resource: Vehicle Scan Tucked in away in the right side of the map, this POI features a small, outdoor Chinese market suitable for infantry combat. 1 Quad Bike and 1 LAV-25 or 1 ZBD-09 spawn here when captured.

[Conquest Large] Tiny collection of houses has become a full village over several levels of terrain. It's a very destructible area – which makes it a perfect place to ambush Chinese tanks to stop them from getting to the center of the map.

Commander Resource: Infantry Scan[Conquest Large] The wood yard still spawns a powerful vehicle like the original, making this flag a must-have for insurgent US troops wishing to confine the Chinese to their base. 1 Quad Bike and 2 PWCs spawn here, along with a LAV-25 or a ZBD-09.

Commander Resource: Cruise Missile One of two flags on the island in the middle of the map which holds a Chinese pavilion and multiple rock formations for ample cover for infantry.

The other flag on the middle island which holds a Chinese temple. A flag which features short to medium range engagements inside. Features an grand staircase in the front of the temple on the U.S side of the map. Also holds overwatch towers which is climbable by ladder.

Rush features five sets of M-COMs, the largest amount during Rush for any map in Battlefield 4, and moves through the majority of the map from the Temple to the Power Station.

Due to the popularity of the Battlefield 3 map Noshahr Canals in the survey DICE set up for the Classic Map Project and the overwhelming demand from most Battlefield 3 players, the adjacent dock area to the U.S deployment is a replica of the Team Deathmatch area from Noshahr Canals. 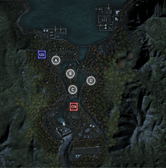 Bridge from Point B

An early version of the Dragon Valley 2015 featuring Mi-28 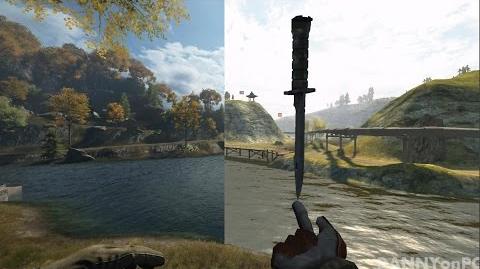 Retrieved from "https://battlefield.fandom.com/wiki/Dragon_Valley_2015?oldid=373123"
Community content is available under CC-BY-SA unless otherwise noted.