Dreadnought is a Codex Entry featured in Battlefield 1. It is unlocked by obtaining ten kills with the Dreadnought. 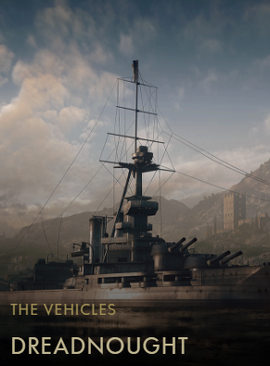 A behemoth armed to the teeth with ten 340mm guns and a plethora of other guns, the HMS Iron Duke was the first of the super-dreadnought class battleships coming out of the dockyards in Portsmouth. She saw action at the Battle of Jutland where she engaged several German battleships and sank a number of destroyers. In 1918 flying-off platforms for planes were intalled on the top of two turrets.

With the launch of the dreadnought ship class, the scale of naval power was reset overnight. As a result, the naval arms race was deeply rooted in the causes that led up to the First World War.

Retrieved from "https://battlefield.fandom.com/wiki/Dreadnought_(Codex_Entry)?oldid=356735"
Community content is available under CC-BY-SA unless otherwise noted.