Drip Gun is a Codex Entry featured in Battlefield 1. It is unlocked by killing ten enemies with a sidearm in the chapter The Runner of the singleplayer mission The Runner.

THE DRIP GUN - LEAVING IN STYLEEdit 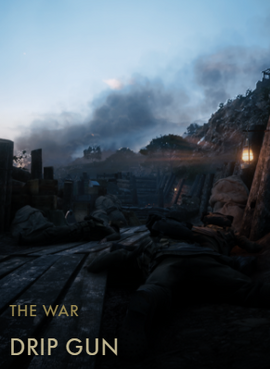 The Anzacs (Australian and New Zealand Army Corps) used improvising self-firing rifles during their evacuation from the Gallipoli peninsula. One small tin filled with water dripped into another small empty tin that was attached to the trigger with a wire. Eventually this would pull the trigger and fire the rifle. Attached to several rifles with different timings, this would trick the Ottomans into thinking that the Anzacs still occupied their positions and make the retreat at a safer affair.

The deceit was a success. 80,000 men evacuated the area with only half a dozen causalities.

Retrieved from "https://battlefield.fandom.com/wiki/Drip_Gun_(Codex_Entry)?oldid=345530"
Community content is available under CC-BY-SA unless otherwise noted.